More on the 6 Hour

There were 19 teams in total. The 2 clubbie teams lapped consistently all day with no real reliability problems and no damage to the cars either, although there was a moment when a sedan in another team had a "big engine problem" which left enough oil on Clubhouse to cause all the following cars to slide all over the place. Fortunately nobody hit the wall but there were many close calls. Our two drivers at the time were Ross Kingham and Norm Clements and our "supervisor", Sean, reports that both their heart rates reached +200 for a while, whatever that means. 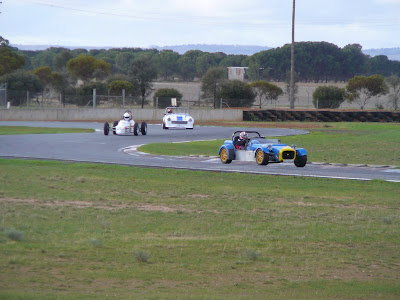 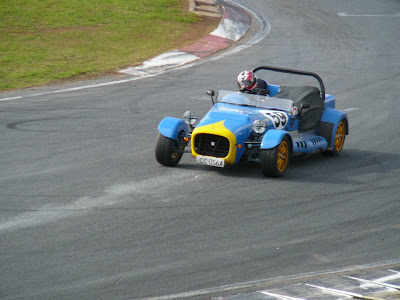 The results for the 2 clubbie teams is as follows:-
I'm in it for the beer Team A
Paul Doube
Ruth Doube (loved the pink race suit)
Ross Kingham
Barry Edson
Paul Rix
7th overall.
I'm in it for the beer Team B
Dick Wright
Richard Wright
Norm Clements
Kym Ninnes
11th overall and Best Presented Team award.
During the day, Norm managed to get under the 1 minute 30 seconds time for the first time ever. He just keeps getting better and better.
We've got a whole year to get together a Bolwell team and there seems to be a bit of interest in that. We used to do it regularly in the distant past.
As for "I'm in it for the beer", I didn't see much of that until we got down to the Mallala pub after dark. The BBQ was good though.
Roger Trethewey was also there, competing in an MX5 team, getting to drive his old supercharged MX5 racer.
Posted by John L at 11:22 AM

That "MX5 team" was the Flying Miatas and they actually won the whole thing (although I heard there's a protest to be dealt with). Consistency is the name of the game. Each of the 5 MX5 drivers were able to go out and rattle off 50 laps each. There's no way of avoiding the lost time through sash changes. Early in the event I asked the question of our teams, do you want to win or have a lot of fun? "Fun" was the obvious choice. Second and third were Alfa Romeo teams.