The Kapunda swap meet was on today. Lots of stuff for sale out on the trotting track and inside, but all we went home with was a box of quinces, half of which are in preserving jars and on the stove as we speak. Here's Beven making his fortune. He got a box of quinces too. 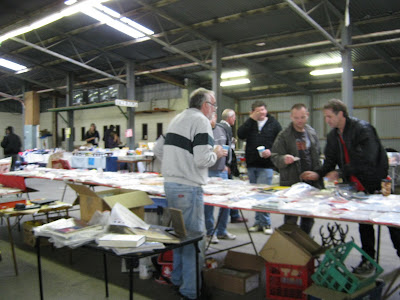 Across from him can be seen the Truro Dirt Circuit mob, making donuts as usual, raising money to finish the track which, I heard recently, may well be ready for next summer. Next to them, and just out of view, is Duncan Hudson's stand. He does books too and has been a regular at Kapunda for donkeys years. I wonder if he was cold last night. I saw him rolling his mattress out. He was going to sleep the night with his books. In my Graham Paige post, I mentioned the old VSCC blokes. He was one of them. He's a Hupp man and compiler of the Hupmobile register.
Below is a shot of the outdoor area. It rained overnight yet held off all morning which was pretty lucky. Ned from the Copper Pot sold a bit of Holden stuff but then I noticed a 5-speed box going into the trailer. Dale and Dianne Palamountain seemed happy with what they'd sold and the usual Kapunda desperates and Valley Rodders were doing a bit of trade as well. 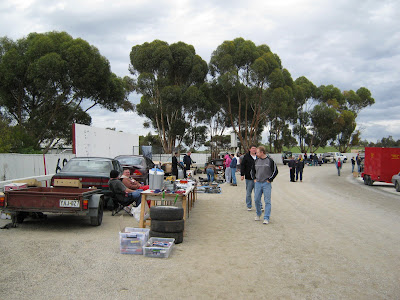 What about this El Camino ute? I've never seen so much metal for such a little tray. And how about the tiny fibreglass canopy. This guy is one of Trevor's mates. He planned to roll his swag out alongside the ute too. I bet he ended up crawling into the back. His plan was to keep warm with a flagon of port. He was down at the Clare Castle filling it up when I took this pic. He didn't stay for the inaugural darts tournament against some mob in England (all done by webcam). I noticed this morning he'd only managed to get halfway through the flagon. 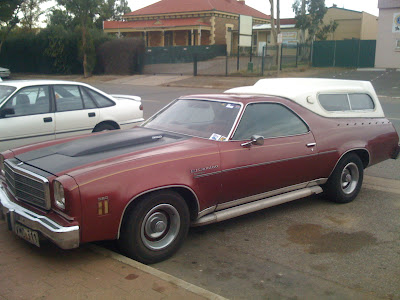