Hi John
As you know the photos in the Wheels article are B8/88 that now lives in my shed. I have made a few changes to the car. New adjustable GAZ front shocks and coil overs, new 750 cfm Holley double pumper on the 351 Cleveland and painted the Simmons wheel centres charcoal (too much bling for me with the gold) and fitted new 225X14 BF Goodrich tyres. I also have the 5 original wheels and Nagari seats (Recaro's fitted at present). The spare wheel in the car has the original Avon radial still fitted in good condition. The previous owner, Dave Lillis, had done considerable work on the car in the 18 months before he offered it for auction with Shannon's. Sadly he was killed in an accident last September in Queensland. I spoke to him at length about his ownership of B8/88 and have an extensive file with receipts and photos of his work. I am very pleased with car and how it drives and performs. Some pics attached.
Regards
Ross 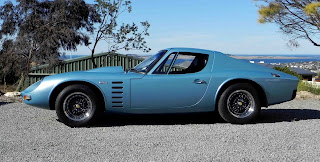 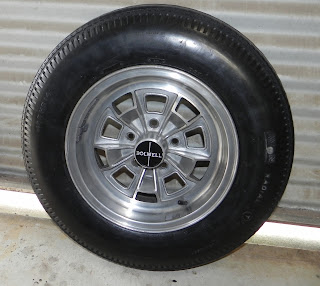 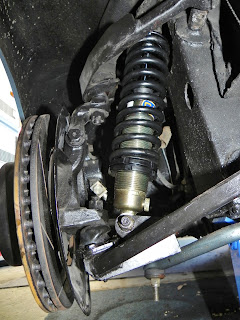 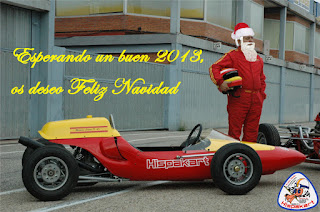 Not sure if it's out yet, probably is. Get down to the newsagents and get your copy because the retro pages this month feature the Nagari. 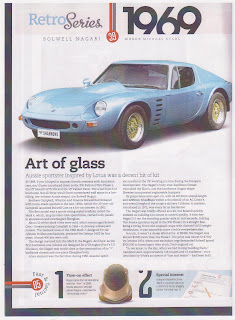 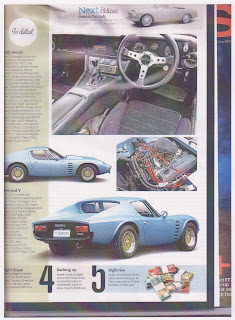 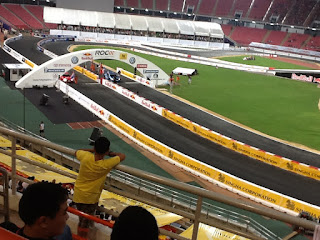 Colin and Chaweewan went to the ROC on the weekend.
Looks like there's a bit of room left for the latecomers.
Posted by John L at 3:04 PM 1 comment:

Some company for the Nagari.

New arrival at the Birdwood Mill. 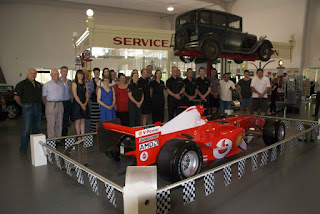 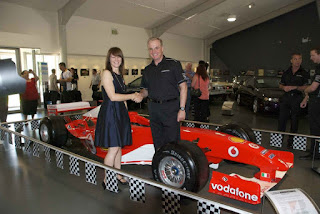 That's Andrew Moffat, Bridgestone's MD, clinching the arrangement of the long term loan with Marianne Norman, NMM Director. That's how we do business in these parts.
Posted by John L at 2:56 AM No comments:

Still time to get in on the Molly raffle

Molly Taylor is a young Australian Rally Driver currently competing in rallies in Europe.
The Australian Motor Sport Foundation has launched 'The Ultimate Supercar and F1 Tour' raffle, to help raise funds for her 2013 Rally Program
We are hoping the Bolwell Club of WA would be interested in forwarding the raffle details to your members, to give them the opportunity of purchasing a ticket in this unique raffle and at the same time support a young Australian currently competing overseas.  The prize has been specifically chosen to appeal to motoring enthusiasts.
Molly has been living in the UK for the last 3 years, and rallying in Europe.  This year Molly competed in four events with an Italian team, United Business & BP Racing, driving a Citroen DS3 R3.  She competed in two events in Italy and two rounds of the 2012 WRC in Finland and GB.
Molly's competitors in the WRC events were two very fast and experienced French drivers,  Sebastian Chardonnet and Mattieu Arzeno, which offered Molly a very solid benchmarking opportunity.   Molly's competitiveness against these drivers (trading stage times throughout the event and leading her class in Rally Finland), earned her solid credibility within rallying circles.
United Business and BP Racing are very keen to do a full season with Molly in 2013 competing in the European Championship, driving the Citroen DS3 R3.  United Business have secured part of the sponsorship required.   Molly is now seeking the remaining budget to complete the deal.
The Australian Motor Sport Foundation raffle offers a once-in-a-lifetime motorsport holiday to Europe, valued at $25,000.  At the same time it's a fantastic way to join Molly's supporters group and help her 2013 Rally Program.
WIN A TRIP TO THE 2013 MONACO F1 GRAND PRIX
ü  Fly business class to Switzerland

Tickets are $100 each.
Tickets are available on-line on Molly's website. www.mollytaylor.com.au/raffle
For people who prefer not to purchase tickets on-line, we have attached a purchase form which can be completed and forwarded back to the AMSF.
A link to a recent Youtube clip of Molly in action at WRC Wales Rally GB:
http://www.youtube.com/watch?v=ULEVcJoo7ac
If you would like any further information, please don't hesitate to let me know.
Kind regards
Coral Taylor
0417 446 940

From an "impeccable source" I have learned that a quality Nagari model is on the way from an established but undisclosed model maker. It is likely to be in resin rather than diecast but very high quality. Don't get too excited, it's going to be about 18 months to 2 years out. "These things take some time to go from inception to production (business cases, pattern making etc.)".
Posted by John L at 8:38 AM 1 comment:

Keep an eye out.


The story goes – About a week ago some guys went to look at a Valiant Station Wagon 1966 V8 at an old chaps house in Bolivar and he was not interested in selling.
He died 3 days later and a few days after that the vehicle was stolen out of his fenced yard.
If anyone sees or hears of this vehicle it is Fawn in colour Rego Number UCJ 733 Please phone Trudy on 8186 5605 or the Police as it has been reported to them.
Posted by John L at 8:57 PM No comments: