I really enjoyed reading Tony Shaw's "The Missing Link - SR6". From it, I gained more knowledge of Alan Newton's path through the Group A sports racing world, among other things. However, I did notice what may well be a bit of a discrepancy in the text and I'll apologise now for sticking my nose in where it may not be wanted. The part I am referring to is as follows:-
"A report in 'Racing Car News' magazine in July 1978 describes the SR6 coming 9th in the third round of the Australian Sports Car Championship at Amaroo Park in NSW. The SR6 was driven by Matt Pintar and was competing against the Bolwell Nagaris of Ross Bond (race winner and series leader), John Gourlay and Alan Edwards." I would like to suggest that the RCN reporter must have heard of a Bolwell SR6 but didn't know the difference between it and a Mark 7. At that time I think the SR6 was languishing in a shed up Brisbane way and I don't recall it venturing south to Sydney around then. The report on the race in Chequered Flag at the time may be more accurate. Matt Pintar raced a Mark 7 and had the car for ages, only advertising it for sale quite recently in Slipstream. I remember that race in particular and not only was there no SR6 there, it would not have been eligible anyway as it was not a Group D Production Sports Car but a Group A Sports Racing Car. My main interest in the race at the time was based around South Australian Bolwell Club member, Allan Hanns competing there for the first time in the second of his Datsun 2000s, the ex-Whiteford one. 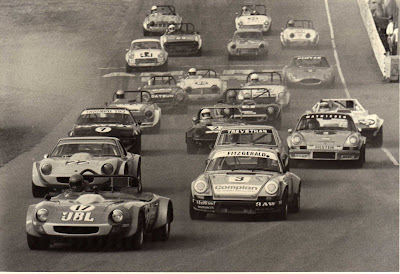 Here is a photo of the start. The Bond and Gourlay Nagaris are prominent and Alan Edwards is behind the black Elan. There were 3 Datsun 2000s in the event and Allan Hanns' is the darker one with 'DATSUN' boldly written across the front. You can see the Matt Pintar Mark 7 with a bit of clear air space behind Warwick Henderson's monster Corvette. I'm ready to stand corrected and someone may like to ask Matt if he has driven the SR6.

I remember commenting in a previous post ages ago about Allan's spirited drive in this race. He actually came 4th behind the Bond and Gourlay Nagaris and one of the Porsches. That was a very quick Datsun nevertheless. His times around AIR in the blue and white Bolwell were only 3 seconds quicker than the Datsun. Beven was reminiscing about the Amaroo race tonight and recalls that Allan almost didn't get to race there at all. The scrutineers gave him such a hard time, making him dismantle stuff to prove eligibility that it became too late to get into the race as the grid was full. Thanks to the generocity of a local driver who gave up his spot, Allan was able to get in.

We all know that!