Yesterday was the MSCA 6-hour at Mallala. There were teams of TRs, MGs, MX5s, heaps of Alfa teams, teams of XB and XC V8 Falcons, Commodores etc. Austin 7 club had a team, so did some SAMROA people who could be spared from flag duties. Deniliquin Sporting Car Club was represented along with other interstate teams. But most importantly, Clubbies SA had two teams of Clubman cars that included Kestrel, Westfield, Elfin and Clemente examples. Beven took this photo of us timing people crammed into our bunkers on pit lane with his Nokia. From left to right we have Ken Stratton on the twoway, Robert Jacobs, Dean Malone, Rick Wallace, John Low and one of the drivers, Richard Wright. 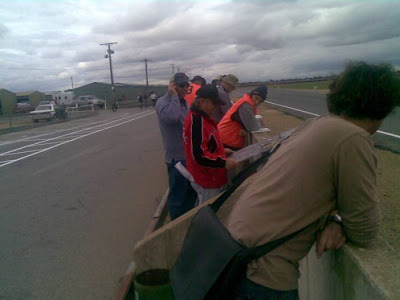 I don't know the results. When we left last night they were still doing their sums. I reckon both Clubbie teams would have done reasonably well based on their consistency alone.