Most people would, by now, have seen the 2009 calendar which featured the SCWQ article on Ross Bond's awesome Nagari racer, written by Rob Luck. If you stare into the calendar photograph you will actually see Rob's name in the text. Anyway, it was enough for Rob to begin reminiscing and, in turn, to drag out some of his personal photographs relating to the event, including this one which he's sharing with us. 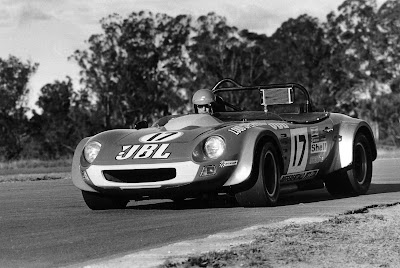 That car didn't always have the deep blue and bright yellow livery. Here's a later picture where, under the same sponsorship, it had changed to a lighter blue with orange. 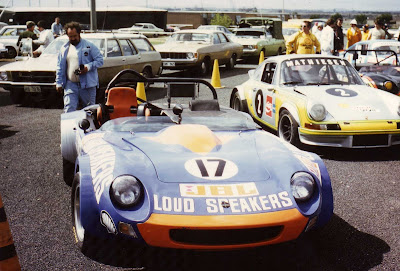 Even later, it became white with two large blue stripes through it, as can be seen in this photo, taken at Baskerville where it is running second to the coupe of John Gourlay. Click on it to take it up to full size. 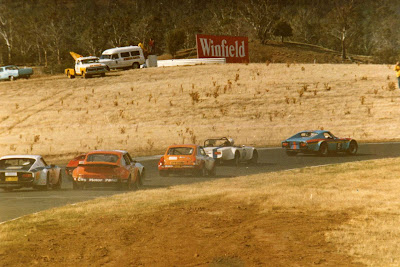 hi John Looks like Alan Hanns in B8/57 last in the photo. Any ideas on what happened to Jonn Gourlays chassis or body. John told me he rembers using the running gear and engine in a sports sedan Regards Gary A.

Gary, John Gourlays original car was B8/38, this was Ranald Mac Lurkins original Racer, probably the first Nagari raced.
It was later turned into a street car, still with the massive flares by Dr Steve Bernard about 1985. The car that was turned into a Sports Sedan was the Black Lilydale Panels sponsored car, this was a brand new car that John built a space frame chassis for, by the time it reached the track Prodsports was a memory, and it was forced to race in Super Sports category against Sports Sedans, I remember being told that John thought the car was too heavy and so not competitive.
Ric Kemp was able to borrow the car for display at the 1984 Vic. Show'N'Tell.
After that John joined forces with Mike Imrie and built a Saab Sports Sedan on the Nagari running gear. I think the body ended up in SA - Vern Leng.
Later again the Nagari/Saab was sold to racer Dean Randle. Gourlay and Imrie built a new Chev SS using the ex John Rierdon Chev Monza that was originally intened to race in the USA.
Darren Hossack later drove the Saab/Chev for John Gourlay (later an Audi Sports Sedan too) after his stint in V8 Supercars, Darren is the son of Ron Hossack who was the builder and driver of the Hossack racer, and also a very Ferrari-esk Mk7, I think Ron still acts as an Engineer on the Gourlay Team.
Phew, that was as long winded as some of JL's posts, I need a drink, let me know if you want photos posted of either or both cars.
PeterG

Yes the body of the second car did come to South Australia but had nothing to do with Vern Leng that I know of.
The Audi Sports Sedan was on Speedweek yesterday.
Yes Peter, photos would be good.

John,
I think the car started out as a dark blue, this was changed around 1977 to the Lighter Blue+Yellow livery of JBL Loudspeakers, andd sometime during 1978-9 it was changed to White with the 2 narrow blue stripes, I think it looked best with the JBL Livery. Not sure what colours it was painted during the Ian Wookey days in WA Street Car class. I recall it being blach with Gold wheels etc. (I think) when it returned to Victoria. Does anybody have photos in either of these guises?