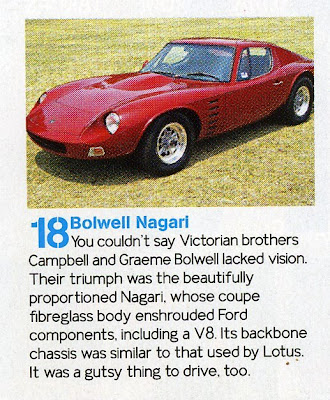 Unfortunately they didn't clearly outline their criteria, who's opinions were sought, and the credibility of the article was lost when they showed a photo of a Cortina Mk2 GT instead of a GT500, and a blinged up Model A Ford instead of a Model T. I also question the two Mitsubishis being included in a list of Australia's Greatest 20 Cars.
What do you think? What would be included on your list?

I agree with a fair few of them. My bias may be showing a little but, while agreeing with the inclusion of the Nagari (in fact I feel it is essential), I sort of lean towards the Mark 7 as well for sheer weight of numbers made. Of course I'd include the Datsun 240Z and I think I'd place the XY GT ahead of the Cooper S somehow. There should be room for the HR in there somewhere as well as the S-series and the WB Statesman. I also think that the HK was the greatest Monaro GTS made (Warwick Yellow of course). It just came out of nowhere and went straight ahead and won Bathurst. I agree too that the Buckle was a great car but no greater than the JWF Milano GT and what about the Goggo Dart? I'd also like to squeeze in the Sloper bodied GM cars of the 30s. If it was an American list I'd include the T Model but not in Australia, I think I'd have to lean more towards the Chev 4 or the Model A. I agree with you, I'd rule out that mediocre Magna but I think the 380 is a seriously good car. I was only thinking about the 380 the other day. I went to a talk by Gavin Farmer about the P76 and it made me realise good cars can be murdered by smart journalists and bum raps and the P76 didn't deserve to go the way it did and with the demise of Mitsubishi Australia the 380 could be the next victim of uninformed bias. Apart from the leaky roof and FWD, the Geelong-built Capri wasn't all that bad either. Over to everybody else.
Posted by John L at 9:39 PM

And of course they forgot my favorite - the JWF Milano GT ;-)

Tony Briton writes:-
Hi
The title is off-putting. Are we saying the best Aussie cars or, in fact, are we saying the best cars sold in Aussie?
I fear that we are confusing great cars with cars which were different.
The great cars would have to include:-
Bolwell Nagari - apart from Melbourne and Adelaide where the Mark VII was known - the Nagari was a national car and known everywhere
Holden FX/FJ
Valiant orig series
Holden EH 179
XR GT
XT GT
XB Coupe GT
XY Phase3 GT
Charger RT E38
Monaro HK 350 GTS
Torana Hatch A series
Somewhere there has to be a ute, say the FJ.
The Milano, Buckle, Elfin and others never hit the road in numbers - at least to my knowledge.
I was lucky enough to have an early Milano sports body (tail removed and a flat rear was added a la Ferrari) and chassis to which I adapted a Triumph 2000 rear end - strangely enough a Zephyr was the nominated engine - forces of mothers and moneys saw the car go to Cooma for completion by a Zephyr nut. My Cooper S took precedent before the Datsun 1600 arrived in Canberra - it became the track, hill and road car for some years before the XT took its place.
If we included imported cars we have to include the Cooper/Cooper S as they changed the way we drove and raced - they were the future had we been smart enough to face the challenge to drive smaller cars.
We would have to include the peoples car and the Porsche, the peoples sports car. Maybe a Lotus Elan, the forerunner to Bolwell technology.
What do you think or should we set a number of guidelines and really put the brains to the test?
Cheers
Tony