Bruno Von Rotz took his Milano GT over to Austria for the recent Gaisberg Hillclimb. He sent this photo. The Milano appears to be in very good company. This is a gathering of competing cars at the top of the hill. It must be a bit like Mt. Alma with no return road other than the way you came up. In the background you can see a 904 GTS crossing the finish line (one of 5 such cars competing on the day I might add). 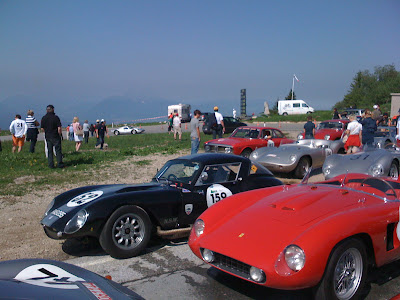 Gaisberg might have a bit more history attached to it than Mt. Alma since it was a prominent European hillclimb from the thirties until 1969. For the last 8 years or so it has been an historic event. It is a supplement to the serious racing on the Salzburg city circuit and the Salzburgring. Bruno tells me that it was supposed to a regularity event but you wouldn't know it as they were getting stuck into it a bit. It looks like historic petrolheads are the same around the world. I'm thinking of some "demonstration laps" at Grand Prix events and a few runs to the Eagle and even the reference to "spirited drives" at Lobethal.

Bit by bit I think we're making progress with Bruno's attempt to gain an FIA European historic logbook, hurdling each roadblock as it appears, but some help is required in the form of proof of racing history in Australia from 1962 to 1968 for this car or any other Milano GT of the time. If there's anybody out there who has some photographs, race results, old programs, copies of Racing Car News, Autosportsman, etc. etc. etc., that might have some reference to Milanos in that era, could they let this blogsite know?