Here's a sports car manufacturer you may not know a lot about. It is operated by Craig Williams. As most people will remember, Craig, for many years ran a business supplying hard to find parts, mechanical expertise, service and reconstruction for Datsuns and Datsun 1600s in particular. That business was Mad Dat. Mad Dat is still blasting along under its new ownership and Craig is concentrating on these extremely well-built and solidly constructed sports cars, as well as fabricating CAMS approved roll cages and the growing and wholesale supply of banksias and proteas. I'm sure it's the roll cages and thoughts about safety that have influenced Craig in the design of his car. I know that the usual design of Clubman cars has influenced his thinking, with their fuel tanks usually located behind the rear axle and their lack of rear impact protection. What I find is refreshing is that younger blokes can throw new lights on some of the died in the wool methods of construction of sports cars that silly old buggers like me never ever get over. I have to admit that being brought up on a diet of live rear axles, carbies, clunky old V8s etc etc, those habits are hard to shake off. An example of what I'm trying to say is that the Mad Ultra car is fitted with IRS from a Nissan 180SX which comes packaged really and is welded into the rear of the chassis. I remember Craig saying "clubman cars are still being fitted with those old Escort steering racks!" and quietly thinking to myself "gee, I was going to replace the Gemini rack in the Ikara with an Escort one". 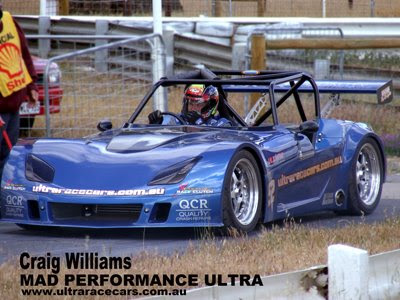 The body for this car is not derived from any other car and the styling is completely new. Car number 3 is being built at the moment. We caught up with Craig and the Ultra at the Mt. Alma Mile. Craig and my son Andrew were friends way back when Andrew built that dear little R100. Here's a couple of Bolwell Club presidents along with young Michael Nicholaou and Andrew Low pondering over the Ultra. 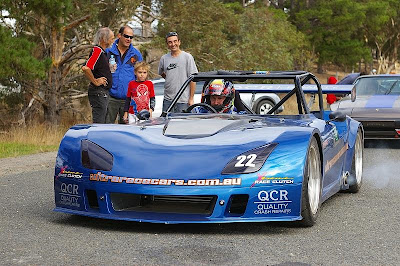