Last word on Easter 2009 I promise

An interesting sidelight to Easter is the number of former Bolwell owners that appear out of the distant past. Three come to mind. Firstly there was Kym Hentschke who was once the owner of B8/93 which is now one of the Lewis Nagaris. Kym has lived in Nuriootpa for many years and was pleasantly surprised to see so many Bolwells turn up in the Barossa. Here is his black 350Z making the acquaintance of Debbie and Peter's silver example. 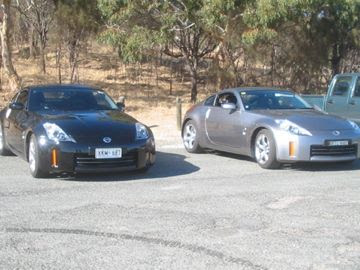 Then, when the funkhana was going on, Colin Evans wandered in, met a few people, then raced home to Angaston to get his photo album which had lots of photos of his old Nagari coupe, B8/74, which, once again is a Lewis car.
Not long after, Shannon Summerton wandered in. He lives in Nuri too and works in the irrigation business. He is a former owner of B8/67, the metallic blue sports. He misses it terribly and is a ready buyer should Guy want to sell it.