The "Mount Alma Mile" hillclimb was a huge success. Well, it was for me anyway. It was near Inman Valley and just outside Victor Harbor. (At Victor, it is spelt "harbor", at Coffs Harbour it is spelt "harbour" have you noticed that?) A few of us went down on the Saturday in "convoy" via Yankalilla which may or may not be the quickest way but they do have a nice little breakfast spot in Yankalilla. The entry was quickly oversubscribed with well over 100 cars and the hill itself was daunting. 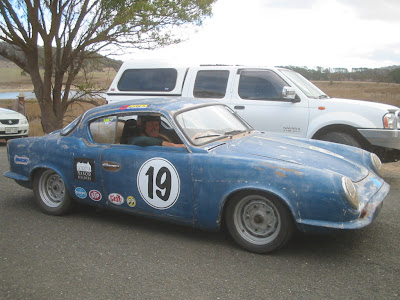 Here's that Ascort of Barry Lord's again. Once again the car acquitted itself very well. He's got three of them which isn't a bad effort seeing they only made 19. 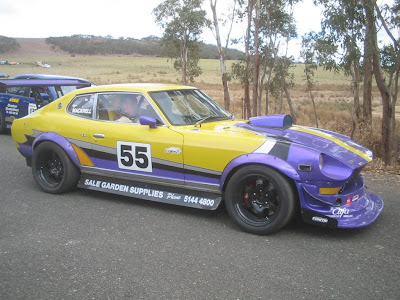 This awesome creature is Kevin Mackrell's 6,500cc Chev powered 260Z which was the overall winner on the weekend. 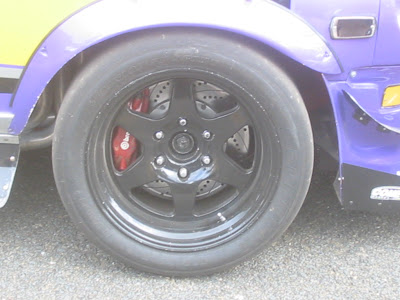 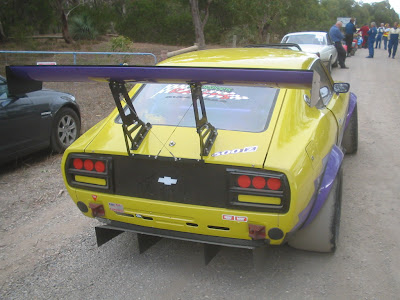 It was possible to be ably entertained by positioning yourself at the bottom of the hill where you could see up to the first two bends. For the really energetic, they could clamber up a specially marked path but that only took them to about a third of the way up the track. Later in the day, Andrew and I took about a 15 minute drive along some steep and gravelly roads to the top of the mountain where we had the best seats in the house (if we were sitting). We travelled through some of the most beautiful country you could see anywhere. It would be a great place to live if it wasn't so cold in winter. Our vantage point was shared only by two officials manning and womanning the flying finish, the drivers waiting to go back down the hill the way they had come up (which they did in packets of about 20), two pisspots who, when they packed up and went, left behind 19 (maybe more but that's what we counted) Carlton Draught bottle tops and an uncountable number of butts and a young photographer by the name of Brooke Whatnell who got some really good shots that are worth a look. His website is called Sportsnaps. He does other motorsports events too. http://sportsnaps.com.au/ I think. I'll put it on the links. In my opinion, Brooke is a very talented and enthusiastic photographer, darting about the place in his mum's Ford Festiva while he finishes his Corolla rally car. Another place to look for good shots is Phil Williams' website www.freewebs.com/philwillmedia For Kym Ninnes' and Bruno von Rotz's benefit, Phil has an album on the site of Easter Collingrove which includes the yellow Clemente and the green Milano GT. 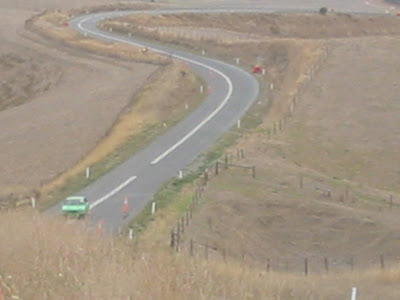 Apart from the excitement of watching that "600Z" being manhandled up the hill, a couple of other things will stick in my memory. Firstly the performance of Jayne White in the Puma clubman who made it into the top 12 shootout, then into the top 6. Unfortunately not into the top 3. Secondly, the polished driving of Peter Hall (always to be expected I guess) in the proper 260Z.
Among the people I noticed attending were Norm and Dino (in the Clubman), Robert Jacobs (obviously gathering material for Custom Kit Car magazine), Ken Stratton (this time in the newly acquired Audi), WA BCCA president, Stacey Nicolaou and his young son Michael, Paul Wooley (who I haven't seen in ages) and Ron and Pip Westren (the only Bolwell in the carpark).
It's on again next year I'm told. I wonder how Bernie's Nagari would go against that purple and yellow Datsun. Hint hint.