This weekend just gone has been a big weekend for the Graham Paige. The Kernewek Lowender happened up at the Copper Coast. It's a Cornish Festival that happens every 2 years. Part of the festival is a very large historic car rally that is getting bigger all the time. It's a great event. We chose not to go this time because the 6-hour was on. You can't be in two places at once. Last time I went we took a Sunbeam Talbot and we lined up at the gate to the starting paddock with the Bolwells and Norm and Sarah went through ahead of us only to see the gate shut in front of us, 5 minutes before the designated cut off time. It was a long way to come to not take part. Fortunately Mary Jervies was still the organiser and she insisted that we register and I want to assure everyone that I didn't act smug when we went back to the official to let us in. Anyway it was a great day and I look forward to future ones.
Be that as it may, I'm really telling you about this year and an international participant. There is a young couple from Argentina by the names of Candelaria (Cande for short) and Herman Zapp who had a dream to drive the Americas from the bottom to the top and they bought a 1929 Graham Paige sedan to do it in. Living in the car, they took 2 or 3 years to actually reach the Arctic Ocean with all sorts of adventures on the way, including rafting the car down the Amazon to get out of some remote place. They have written a book about it all, called "Spark Your Dream". It's a great read. Beven should have it in his cattledog. Anyway, after going back to Argentina, they were still bitten by the wanderlust and took the Graham Paige back to North America to crisscross the US and Canada, visiting the places they missed the first time. They have been on the road about 6 or 8 years now, and a couple of months ago they arrived in Australia with the Graham Paige still going strong. Over a long period of time they will do over Australia, then New Zealand, then Asia. What I didn't tell you is that while all this has been going on the family has been increasing from no kids to four, with the arrival of a little Aussie a month or two back called Marco Wallaby Zapp. With a family of 6 now living in this Graham Paige it needed to be enlarged which they have done by taking out the back seat and extending the wheelbase by 18 inches. It's a beautifully executed job and looks like it has always been that way. Anyway, they were here for the Kernewek Lowender and, as you can see from the photo, the other modification is the raised roof. 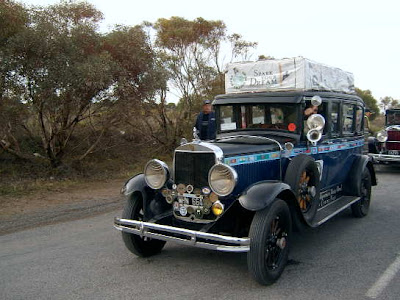 They are staying with an old friend of mine from way back, Fred Chapman, at Reeves Plains. He has an even bigger Graham Paige, a Model 621, which was also at the event. Here it is on the oval with a yet bigger straight 8 Graham Paige from Mypolonga. 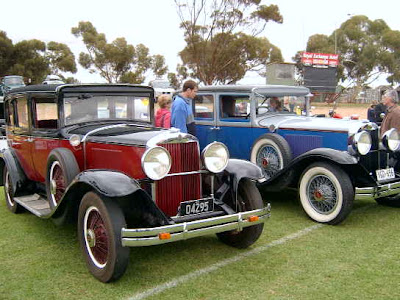 There was in fact a fourth Graham Paige there, a Model 610 that came over from Mt. Macedon in Victoria. At our car club meeting at Gawler last night, all of the Grahams bar the 8 cylinder one arrived. Everyone is staying at Fred's.
Fred has had his Graham Paige since he was about 16 so that's way over 40 years. In my last year at high school I got myself a 1926 Buick. Another kid at school, Wayne Jones had a Graham Paige. Anyway, I joined the VSCC around about then, roughly the same time as Fred and his brother John and here's the Graham Paige and the Buick on the foreshore at Victor Harbor (not Harbour remember) during one of those notorious Victor Harbor rallies in the 60s. 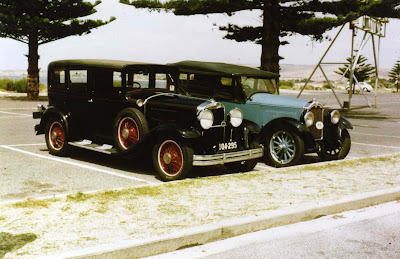 John went on to Amilcars and the like and Fred has continued to this day with the Graham Paige. Even though I had a vintage Vauxhall and an Alvis and a FWD BSA, which were all considered more acceptable in the Vintage Sports Car Club in those days, I still loved my Buick and the power that it had. Fred and I used to race each other with our "Yank Crap" and loved it. Much later, I remember a similar preciousness with the MGB owners at Mallala when the Datsun 2000 came out. The Datto was "Jap Crap" of course, until it came out and blew the Bs into the weeds.

From Tony B this morning has come:-
"The Paige is a rather interesting vehicle and it's even more interesting that the numbers 911 also feature in its history whereby the name Paige-Detroit was changed in 1911.
These 3 numbers have a great significance in world and motoring history."