B8/82 left the factory as a coupe painted Condor Green and was sold new to a Sydney buyer. It later became two-tone black and gold and here's a photo of the car taken by Mark Cleaves in the early 80s, for sale secondhand, at John Thompson Performance Cars on Parramatta Road, a sports car purveyor of the era. So many Nagaris passed through those premises it was uncanny. 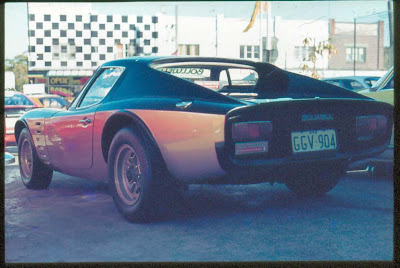 This car was bought by a young man who subsequently smashed it up rather badly. The wreck was bought by Tony Briton and here it is in his carport in Canberra. 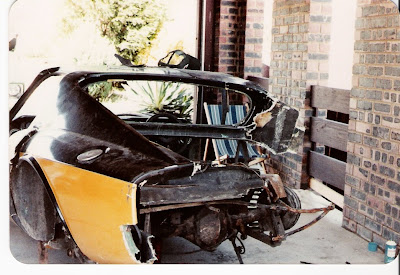 Tony took the remains to Fibrecar and he and Royce rebuilt it. The blue back section in this picture was from another wreck found on a farm in Yass, I thought, although Peter G tells me that it was a Nagari racecar. That's Tony working on the car at Royce's. I was told that the body remains in the background was another Canberra car (Bob Henry's B8/48) which was turned by Fibrecar into a yellow sports, but it could just as easily be B8/107, yet another silver coupe originating in Canberra that is now a red sports living in Sydney. Both cars were accident damaged coupes acquired by Royce and rebodied as convertibles. 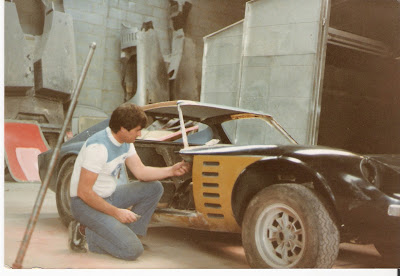 Anyway, B8/82 became a "silver coupe". I'm not sure of the circumstances but it was acquired by Dave Jackson of Melbourne who's had it for many years. That's Dave walking towards the car and nearby is Peter Bartolo (the Victorian Peter Bartolo - ex B8/35). During the rebuild the car acquired a bonnet with the old style narrow bulge. 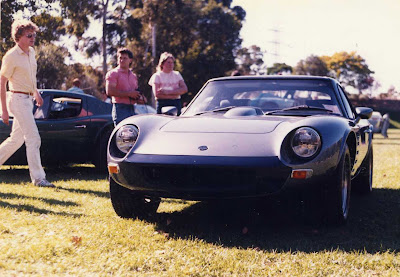 The final photo is of the car in Peter G's old garage, now sporting the yet unpainted more appropriate bonnet. 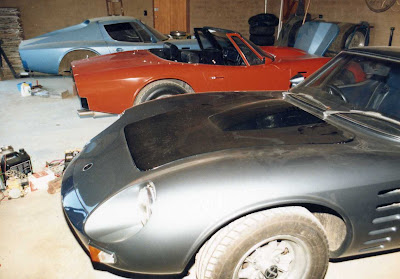 John Thompson Sports Cars. The phrase "typical used car dealer" could of been coined after those blokes. I recall looking at a nice yellow Nagari there one Saturday afternoon in 1977/78. I went back the next day for a closer look only to find they'd jacked the price up more than 30% overnight!!. The salesman's response was "well, that's the price now. If you don't like it bugger off"

Bernie Van Elsen always thought his sports was B8/82 and we all believed him. Then 36 years later he took the trouble to look at its chassis plate and it turned out to be B8/86, a number that didn't even appear on the factory lists.

I probably should bring this post up to the present date. Simon Wells bought the car from Dave Jackson and I bought it from Simon. Prior to that Simon had owned the 350 chev powered Mk 7 that Ian Ransom now owns. Simon remarked to me later that the Nagari felt very tame compared to the Mk 7. Anyway, while Simon owned it he had the floors lowered and the driver's footwell enlarged to provide a bit more room.

The colour is more of a metallic grey than silver and the nose and tail are painted purple rather than black. I still haven't been able to find out what shade is "Condor Green". I assume that it is a standard Ford, Holden or Chrysler colour under another name.

Any later photos, Paul? I'm wondering about Condor Green myself. My charts show only two official Bolwell greens, Apple Green which is bright and light and Windsor Green which is quite a deep shade.

I recall repairing and painting this car for David when working at home and he requested the same colour scheme (metallic charcoal with dark blue front and rear panels) as my original coupe B/8 24 which he remembered seeing when it was new.
regards, Ross McConnell