John Hartley, in America, spent 4 years developing this engine. Now he's producing them and they are in demand. In answer to Glenn's query about an Australian distributor, I would say that there probably isn't one because John builds them to order and there's plenty of orders. I could be wrong, Skelta are using them. They would be a good start in asking the question. 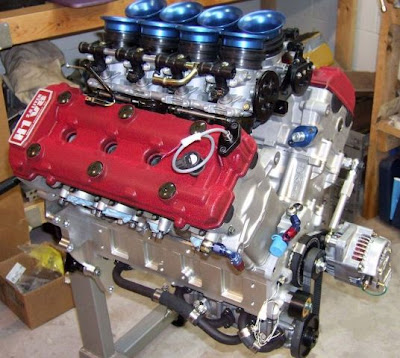 John is not from an automotive engineering background, but a clubman racer looking for more power. His V8, the H1V8 3-litre is a 32 valve unit weighing less than most 4 cylinder engines. He began by looking at watercooled motorcycle engines and settled on the Suzuki Haybusa from which it is derived by mating two of these 4-cylinder units into a V8, casting the block and heads in alloy. These are not the usual 90 degree V8s but 75 degrees to make them compact enough to fit in the same space as a 4-cylinder engine. The target market is for track cars and other lightweight race vehicles which are limited for size and weight reasons.
Posted by John L at 1:38 PM

John, check out dpcars.net. This guy has been building a car for some time and has an Atom with a Hartley v8. i have been following him for quite some time. it is worth going through all of his older stuff.
regards
Simon

My main concern with this would be transmission options. It's hard enough finding a transmission that'll handle power while being light, but this seems like it just makes that problem even more complex to solve. Custom bellhousing? Custom input shaft? What would fit, and just how easy would it be to make it work?