Here's another page that Beven has managed to dig out of his archives or somewhere. 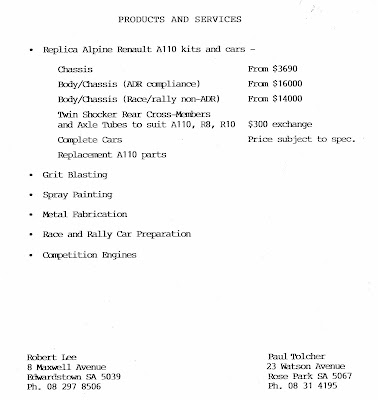 Must be about 20-odd years ago at least. Beven says that Robert Lee is still around the place. That little Alpine business was quite a viable one all those years ago. Paul Tolcher was an old mate of mine. He's somewhere in the Eastern states these days. Paul is one of all those brothers that formed Team Tolcher with their dad, Vern, an equal number of years ago. Team Tolcher was a rally team that was a pretty slick operation and were actually SA rally champions back when the Mark 2 Escort was the gun car.
Posted by John L at 4:45 PM