A run for the new year?

Here's some food for thought for a run South in February. Thanks Chris and Jane G for the suggestion.


Wooden boats at Alexandrina
Mark it in your diary to head to the historic wharf at the river port of Goolwa for the free South Australian Wooden Boat Festival held on Saturday 26th and Sunday 27th February 2011.
The festival programme will feature a range of sailing races, highlighting Goolwa’s fleet of racing restricted 21’s as well as sabres, mirrors and many more.
Maritime displays, as well as putt-putts, riverboats, dinghies, firebugs, rowing boats, kayaks and canoes, along with model boats, will be on exhibition.
The Paddlesteamer Oscar W will be offering cruises over the festival weekend. The Steam Ranger Cockle train travels between Goolwa and Victor Harbor and will be scheduled over the festival weekend to steam into the wharf each day.
The festival coincides with the decommissioning of the 817 Navy Helicopter Squadron, which will join the festival weekend celebrations. 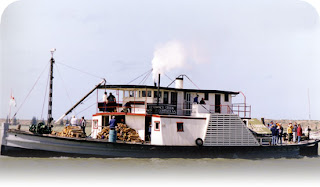