A little more progress.
Regards
Simon
I know that it has been a while since the last update but work is progressing.
Unfortunately, as you will see as you read this I am getting ever more anal with the quality and finish and I am procrastinating all the time over the smallest detail! I’m sure it’s a disease, and I’m starting to think that the car will only be a static display. I don’t think I will ever be able to drive it in anger!
A few small jobs have been attended to, including running a small silicon bead between the chassis and aluminium panels where they join so that dirt and small stones can’t collect there and putting some “clear” tape on the chassis where the body would rub on it so that the paint is not damaged too much. There are no pictures as the work is invisible!
There has been a couple of new brackets made for the fuse panel and the two coil mounts, just a few more hours of carving out bits and pieces in aluminium.
The next part of the build to be sorted is the steering wheel and dash. I always knew that there was a fair bit of fine tuning to be done in this area, but unfortunately I hadn’t realized how much. As this is one of the few areas that hasn’t been fully assembled to this point, it has really demonstrated the value in total assembly before final painting, and final assembly takes place.
First I wanted to sort out the steering wheel. Once again a go kart wheel has been used, which are small in diameter and relatively inexpensive. The range of wheels that fit into the 1960’s mould is fairly small as most imitate latest F1 styles. This time the wheel is steel, not alloy like the last one which I hope gives it a bit of extra strength, after all we are steering a lot more weight than the average go kart.
The steering wheels come pre drilled with three holes. Typically these are an unsuitable PCD to suit the steering hub that I use, which incidentally is cut out of the actual steering wheel from the Celica that donates all of the steering components from tie rod ends to the steering wheel hub.
On the yellow car, I simply cheated and redrilled the steering wheel to suit the hub, and drilled a large hole to accommodate the large nut that holds the steering wheel in place, probably not an overly satisfactory or attractive solution. I have always wondered how it would feel to have the steering wheel come off in my hands at Turn 1 at Phillip Island!
This time I have made a 20mm thick donut shaped alloy adaptor. Bolts pass through the hub into tapped holes in the adaptor and the whole lot then bolts to the column, the large steering hub nut hidden in the adaptor. The wheel the bolts on through three more tapped holes, which run all the way through to the steel hub, making for a neat and tidy finish overall. Incidentally, chassis changes that I made early in the piece, still result in 40mm more length from the steering wheel to the roll bar.
Tackling the dash has presented its own range of problems too.
I decided a while ago that the dash panel I made some time ago was really not big enough.
I wanted to incorporate a volt meter and oil temp gauge as well as my electric speedo gear indicator and shift light that has proved most useful.
The first panel too was slightly “out” with the steering column and not quite in the centre of the car, which I was not happy with. (Have I mentioned being ever more anal!)
Again I made a craftwood buck and hand beat the aluminium over it.
This part was quite easy, but because as I mentioned before, the dash was never properly fitted, with instruments, before painting the chassis typically I discovered that I hadn’t left enough clearance for the backs of the instruments.
To solve this I then machined up some aluminium escutcheons to pack the instruments off the dash. I was only going to make 3 for the dials that clashed, but I decided that they looked so good that I would make them for all of the instruments, warning lights, switches and starter button!
Did I mention getting ever more anal!
I’ll send out pictures of he finished article tomorrow.
Regards
Simon 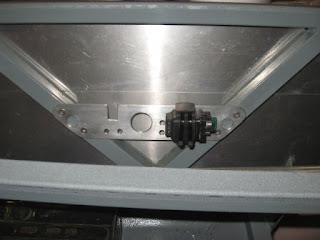 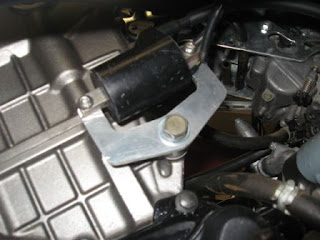 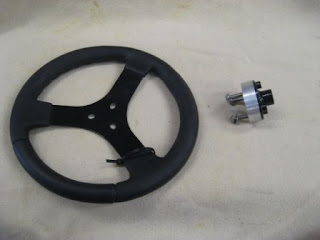 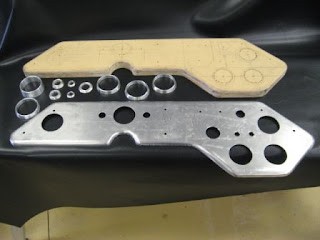