Remember us featuring the clubman that was the first car built by Barry at the age of 16?
This arrived from Barry the other day.

Your photos the other day of the old prefects brought back memories of my younger days and I thought you might like to see this. Some time ago I sent you some photos of my A30 clubman I built when I was 16. What I did not tell you was that it handled like a bucket of crap ! My first motor sport was motorkhanas and "Observed sections" on unsealed roads and tracks. The Clubman cars in The WA Car Club were all based on english 1172 formula observed section cars. (Mud Plugs) My A30 was a lot of fun but not competitive so I sold it and purchased this Prefect based special. Transverse leaf springs and cable brakes. It was the most amazing thing I have ever driven and was 100% predictable and stopped on a dime. I still have many trophies won in that car. 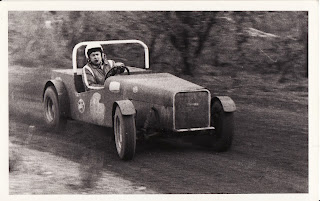 Over here in SA in those days we in the VSCC had similar events to the Observed Sections called English Type Trials. Austin 7s and Amilcars were good for that. Personally, I used a 1932 Austin 10 sedan which had on each side of the rear mounted spare wheel little flat bits above the bumper where your passengers could stand to bounce as an aid to getting you up slippery steep hills. One or two of the keen members made cars similar to Barry's by whipping the sedan body off one of those old Prefects or Anglias, dropping the steering column down and fitting a tube framed little sports body. They were very effective.
Posted by John L at 11:52 AM