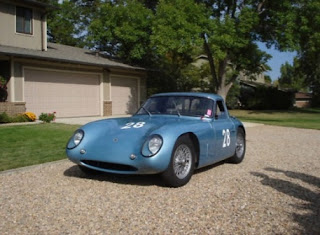 The very first car produced under the TVR name (derived from the creator's first name TreVoR) was a hand-built special designed and built by Trevor Wilkinson in 1947. In the company's early years all TVRs were specials and very few were built. The first production run only began in 1957 and was instigated by an American, Ray Saidel. He helped design and test the car and became the very first dealer. Initially the cars were called Jomars, the name taken from the names of Saidel's two children (JOanna and MARc). Saidel set about taking orders and there were so many that Wilkinson was unable to meet the demand. The embarrassment to Saidel caused him to pull the pin on his financial backing and his involvement and TVR Engineering was born, with finance from elsewhere.

Now come around to the back of this car. 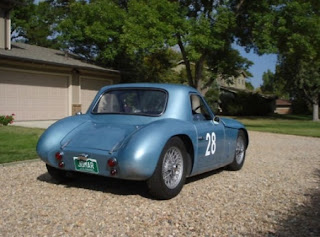 It's a notchback, not the fastback that we are used to seeing on the early TVRs.
Posted by John L at 6:07 PM