Last night was the Kapunda street party and along Main Street were all kinds of interesting motor cars like Austin A95, Brian's Citroen DS19, the other Brian's Sunbeam Alpine, Terry's Yank Tank that is so huge that the bonnet is longer than the cabin space etc. etc. But I feel like giving some "air space" to a few "little" cars. Like this Morris 10 for example. 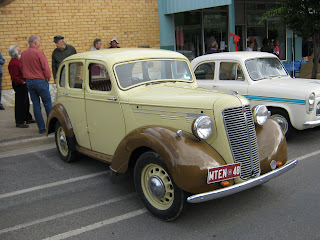 What a beauty.
And this Ford Prefect of yet another Brian. 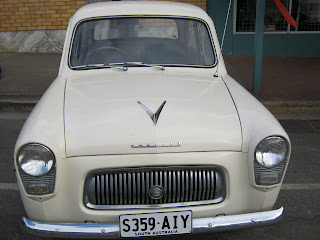 This is a stablemate of a collection of MGB V8s that are one by one being converted to RHD that Brian has brought home after all those years in California. Ray and Jean had brought along their earlier "top heavy" Prefect too. Anyway, when these Prefects came out they were a far cry from the earlier ones which really go back to the thirties as far as style goes. Back in the day I had a cousin with a pink one. I remember them as being very basic but quite rugged, able to take anything you threw at them.
And here's an Anglia wagon. 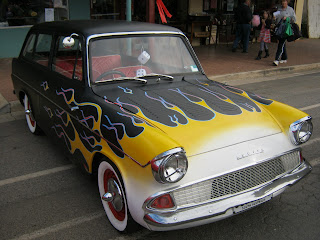 There was an Alfa Romeo 17/50 that seemed to regularly run in the AGP in the 30s and even as late as the early 50s. It belonged to and was driven by a Mrs. Jones in Sydney. It became known as the Mrs. Jones Alfa. In 1932 when the Ford V8 came out she fitted it with one of the side valve V8s to get a bit more power. It was then called the Mrs. Jones Alfa-Ford. One year she wasn't in the race because she rolled it driving it down to Phillip Island from Sydney. Anyway, this is the Mrs. Jones Anglia - different Mrs. Jones, different generation.
Posted by John L at 1:23 PM