Last Sunday the Gawler Swap Meet happened and it was HUGE. In the short space of time that I've been going to them I've seen them at the trotting track, then at the thoroughbred racecourse and now at the showgrounds. I wasn't prepared for the enormity of the event but it became evident by the cars parked in the streets right down to the caravan park almost. Yes, it makes the Kapunda Swap Meet look small by comparison but it seemed much bigger than previous Gawler events too. Maybe it's a sign of the times which is bringing out the bargain hunters or perhaps a celebration of the proposed swap meet and garage sale squad not getting off the ground (which didn't stop one t-shirt vendor doing good business with one style depicting Mike Rann with toothbrush moustache and hair parted down the middle). Talking about the caravan park, there is an area out the front where you can park your car with a for sale sign on it and attract the notice of everybody who comes in to Gawler from the North. Well, that stretch of bitumen was chockers with HRs and so on, quite a smorgasbord. Probably just as well, there might not have been room for them all inside the showgrounds. Yes, inside there was just row upon row of "stuff". In my opinion, the "buy" of the day was an unrestored but very complete, very straight, rust free 1948 Chev ute on a trailer. The owner wanted $950 for it. It sold almost immediately to a cheeky buyer who stole it for $900. I can't talk, I paid $10 for a "Hillman" tail-light assembly marked $15, my only purchase. Don't know what happened to the other one. Same goes for a very tempting 240K tail-light set - yet again one side only. Beven and Duncan had their usual book stalls inside in the comfort of the Roller Derby Hall. Gawler members seemed to be everywhere of course. Some were vendors selling everything from coloured licorice to sales brochures to Triumph instruments while a more articulate member could be heard making announcements over the P.A. I saw a few Kapunda chapter members, Dale had his usual collection of bits and a certain other Eudunda bloke was vainly searching for Herald/Spitfire bonnet catches for his Italia. There were even a few Bolly members from places like Birdwood and Eden Valley. It would be nice restoring a T Model these days, there's reproduction everything. Not much Jap stuff although I did see a Datsun 1600 that had the roof crudely hacked off and just as crudely tacked on again. Don't say "why would you bother?", they're getting harder to come by now. A stroll through the display cars was good, lots of nice Chevs and GTs and Toranas and Monaros and early Holdens and in particular, a very striking Landau coupe. This lovely looking "Mark 7" motor was in an historic speedway vehicle. I don't know whether you call it an early sprint car or sportsman or hot rod. Different speedways had different types of cars. This was evident to me years ago when I moved to Mt. Gambier and they had hot rods and things at Borderline that we city-slicker Rowley Parkers weren't familiar with. 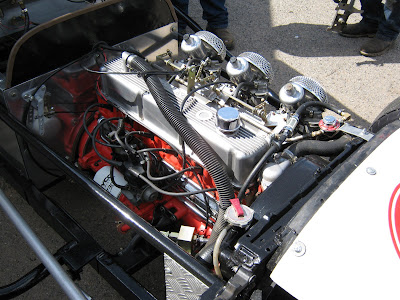 Out in the street was another car show among the visitors vehicles. I noticed a Mark 5 Jag, lots of '55 to '57 Chevs, a Targa Florio, Mustangs and GTs everywhere, a Sunbeam Tiger etc. etc.

John,
Was the taillight you purchased the Nagari one that Aston, Hillman, Reliant and even the original VesKandA coppied??
The last swap meet I went to I was able to purchase one of those chrome Italian mirrors that many Nagaris' originally had, still in it's original box.
Sometimes it's well worth the effort of looking at all the sites.
I'm dreading Bendigo in November, this ones huge!
PeterG

That's the tail-light. Yesterday at Birdwood I saw a Humber Sceptre with them as well. Another imposter to add to the list.

I forgot that Bristol with the vertical setup and the Lotus 7 series 4 - the one with the all fibreglass body, is that it?