I've been collecting pictures of Devins and putting them away for future reference because I'm working up to a post on the sports cars of Bill Devin. Bill had been building fibreglass bodies and complete cars from about 1950, continuing into the sixties. He only passed away in 2000. He began racing sports cars in California and was a mate of Phil Hill and all those other guys who raced the sporties back then. In addition to the bodies for various chassis, he made a variety of his own car models. Everywhere I look in American historic sports car events I find Devins or Devin based specials. Bruno in Switzerland has a Devin TR as well. Anyway, tonight I discovered these old ads in Road and Track dated 1956. Read the text, doesn't this look like the JWF Milano/Italia beginnings on the other side of the world? 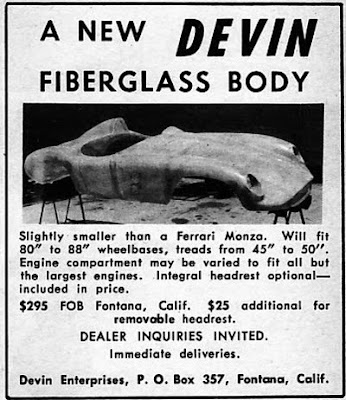 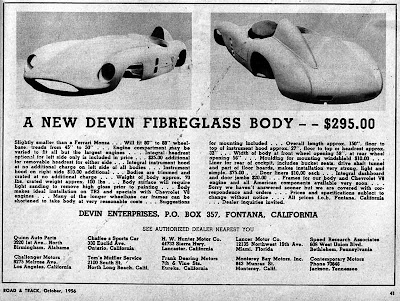 The story of Bill Devin and Sam Johnson in fact has similarities. However, thanks to the large geo, Bill Devin was extremely successful with his bodies, selling 3'000 or more of them. Also he built quite impressive cars too with the Devin SS. And he shared a passion for Italian cars with Sam Johnson. Bill Devin had raced Ferraris for some part of his career. Too bad that the two guys have never met.

From You Tube. A drive of a Devin:
http://www.youtube.com/watch?v=CeC1hQcl0T0