Bob also sent me some photos of the next Nagari he and Kerryn had after B8/5 with the comment:- "As for the yellow sports, we sold it about 7 years after moving to the Gold Coast, must have been around 1995, to help pay for a new house. It was sold by Gilltrap's Auctions (before they absconded overseas!) and sent to Perth. It was possibly bought by Errol Du Boulay according to another WA Bolly owner Charlie Stone." 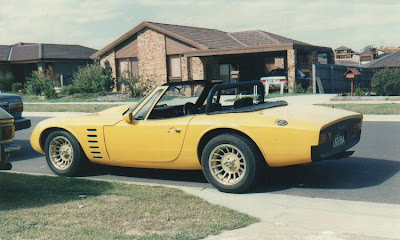 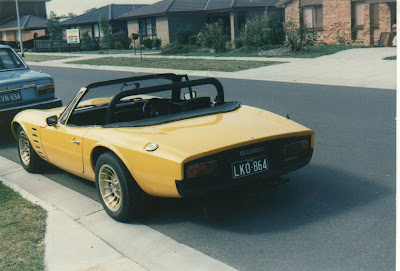 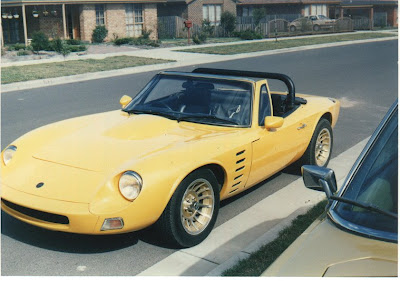 I've always been fond of this car. I think it was an advanced kit and very well built at the time. One of the things I recall was the smart looking Jaguar rocker switches. In the early Nagari days I remember original owner, Howard Ellis, who lived in North Melbourne, bringing it along to the odd Easter. Next to own it was Bob and Kerryn Hampton, also Victorians at the time. Bob grew up in SA and began his working life there, managing to escape before they closed the gate. Subsequently they moved to Queensland. On 29/9/1991, the car was sold on their behalf at Gilltrap's Auction. The publicity on the car told us that there was a reserve of $40,000 to $45,000, that the owners had owned the car for 7 years, that it had been restored three and a half years ago, it had covered a mere 6,700 km and was in good condition. The purchaser was a Mr. A. Gould. It ended up in WA, being owned by John Illig and then Errol Du Boulay. It is in the process of changing hands yet again. I wonder if that Victorian registration number in these pictures would still be available should that be where the car settles.
Posted by John L at 9:38 PM

The vicroads numberplate site (http://www.vplates.com.au/) shows that combination as being available.