Remember a few months back we talked about B8/5? We traced it through SA, NT, Vic. and finally NSW. It was more than a few months ago now that I think about it. Bob Hampton recalls that I had mentioned his crashing the car and says:- "Actually I was having a great drive through the Dandenongs near home when the bolt holding the RHF upper wishbone snapped! It appeared to have an old stress fracture in it, possibly as a result of being driven from Darwin to Melbourne to sell it. Luckily I had just turned from a "T" junction and was not travelling too fast, otherwise the end result would have been much worse.

Attached are a couple of photos that I managed to find. The 1st one was taken on the beach at Robe at one of the very early get-togethers with the SA club over Easter. It has been blown up from a section of the original photo so is a bit blurry unfortunately. It is in its original colour 'Vermillion Fire', the one used for GTHO's. If you look carefully you'll see that it had side vents behind the front wheel arches where the top 3 dummy ones normally are. These look like they have been removed judging from the photos on your blog, although the openings are still there. The other 2 photos show the car after the accident and the offending wheel." 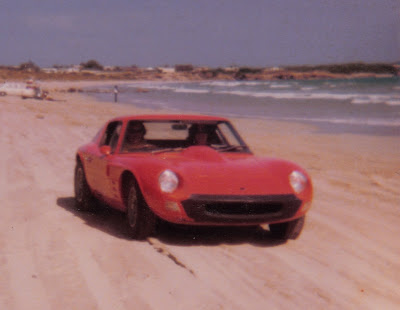 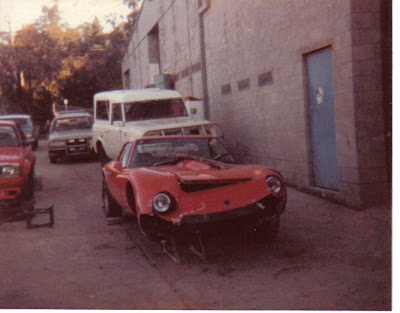 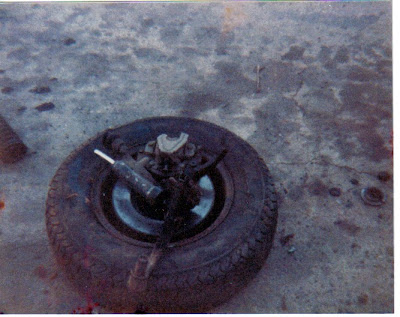 That was a long time ago. You can't drive on the beach down there at all now. It's probably a good thing. Some of the rarer sea birds are coming back as are some of the creatures in the sand. Really, they should close off Aldinga and Moana for the same reason I think. That probably sounds funny coming from me as I've done my fair share of tearing up the beach in my youth, towing brave people on a tyre on a rope behind the TR2. I've grown up now. When I was married, Robe was home territory for us and Long Beach went for miles around Guichen Bay, almost around to Kingston so you could drive out of sight and swim nude without bothering anyone. I believe there's all beach houses right around there now.

I don't think Bob was the Lone Ranger with collapsed front ends from broken wishbones either. Bernie Van Elsen was another and you hear of others occasionally. There wouldn't be too many standard wishbones around. That's another story perhaps.
Posted by John L at 11:00 PM