Quite a few people might remember this car because it featured on the 1978 calendar, the first one in colour. This particular photograph was taken on arrival at Bernie Van Elsen's farm at One Tree Hill where the calendar shot was done. At the time, it was owned by Geoff Mann who was finishing off a major refurbish. He didn't have it quite back together and running when we needed to take the shot. That's the reason it's on Murray Willmott's racecar trailer and behind my trusty Valiant tow car. That's Peter Taylour in the sexy shorts. 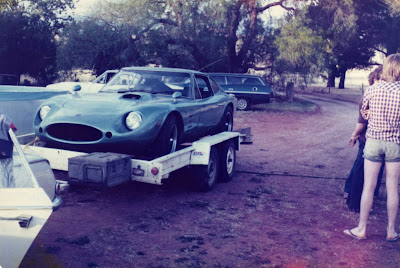 This was a fairly late Mark 7 being purchased from Kadala Industries on 10th October 1970 by Brenton Stanford, an electrician, who lived in Renmark at the time. It was first registered on the 16th March 1971. Brenton subsequently moved to Adelaide and later to Nairne.
On the 4th December 1973 my neighbour and good friend Murray Willmott bought the car and it became a well travelled road car until Murray became bitten by the ProdSports racing bug that was taking off in South Australia. About 3 years later, in an effort to be even more competitive, he stepped up to Ron McPherson's first Mark 7 and for a while Colin McAskill took it over and on 5th January 1977 passed it on to Geoff and Sue Mann. Geoff turned it back into a more drivable road car and repainted the original orange car metallic blue. When Geoff sold it, to buy the Nagari sports that Scott now has, it went to Western Australia and, as far as I know, has never been seen in SA again. The South Australian rego expired on the 8th August 1980.

Yes..The car was sold to my brother inlaw Ron Clark (Brother of my wife Susan & sadly, recently deceased Jan 2010.. ) & as you commented ,the Bollie went to W.A.
Some time down the track Ron sold it to his Bank manager to purchase his third Falcon XW GT.
After that the car,once again went into hiding.
I do however remember that day of the calendar shoot with fond memories......the car was pretty much lacking interior ,but freshly painted in a stunning blue paint job....
I was over the moon to be asked to present it for the calendar feature.
For those with original calander shots ...if you look at the farside quarter window.....keep looking , as it aint there.lrf.
Really didn't matter as all the focus was on the young model that Bernie had selected for the shoot.
She was.....very.. attractive & wearing a very white & light cheesecloth dress...she obviously forgot(dont think so) to put on underclothes.(if you were superman you wouldnt have needed your x-ray eyes)
I was standing next to Bernie(photographer) when , between shooting she wandered over and very casually asked if he wanted any naked shots.
Bernie looked around at the fifteen or so gobsmacked guy's...& wifes...& said....'no I think youve done enough '....yes..he was right...the damage was done.
Great Days.

PS..funny thing when I was rebuilding the car......
I found an inscription carved into the drivers side floor.
It simply said..."Lot's Of Luck....You Will Need It "..
Whoever that was....( Phone me,as I need next weeks lotto numbers)...new what he was talking about.lrf.
Cheers All...Good Memories.
Geoff Mann