This is the Mark 5 windscreen. Unlike the Mark 7 and the Nagari, which had dedicated windscreens, the Mark 5 had something derived from another car.

Years ago, when we all had our Mark 5s, we learned that they were Holden FE/FC back windows turned up the other way. Here's an FE back window and that looks pretty true.

Someone told me that they were from FB/EK model sedans, then somebody else reckoned that FE, FC, FB and EK were all the same. I've just had a look at an FB up the street and neither is true. They seem to have a bit more of a curve in them. I remember Campbell saying years ago that he thought they had used Austin Freeway back windows. Here's an Austin Freeway back window below. Maybe he's right. I still support the Holden notion. 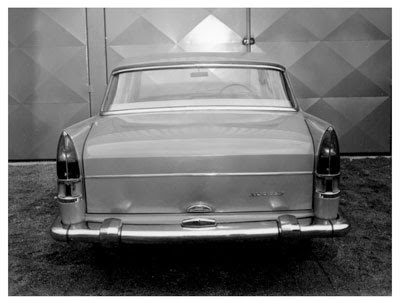 I've never broken one so haven't had to worry about it really.
I recently read in a Jaguar Club publication that the "Elgaram" windscreen was also an FE/FC back window. There are pictures of it elsewhere in this blog. What do you think? It doesn't look much like a Mark 5 but by comparison, it has much more of a rake on it.