Look what's turned up in Kapunda.

This is a great little Mark 5. It's about to become even greater. It's not really mine, it's Colin McAskill's. He bought it in Bairnsdale as the stickers say but it can live here for as long as Colin likes. Meanwhile it's up for a rub down and a few coats of Sebring Orange, some period mags, a rewire and lots of other refurbishments, all in time for Easter next year. 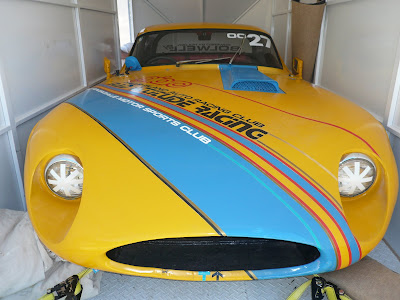 Here it is about to come out of the trailer. This trailer has just been built (also in Kapunda) to house the SR6. Anyway, the front spoiler has already been removed so at least you can open the bonnet. As it is going to be a road car, it's doubtful if it will ever go back on. 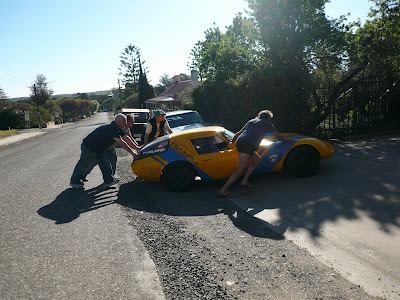 And here it is being pushed into the yard. I get to steer. I get all the easy jobs. Yes that is a WW2 Willys Jeep in the background (being tidied up for the Bay to Birdwood the following Sunday). The Mark 5 has now been fitted with a brand new starter motor so at last we could start it up and it sounds great. It has a Commodore rear end, hence the flares that were on it, but unlike the front spoiler, they will go back, but will be moulded into bodywork. I will keep posting photographs from time to time as progress is made.

That's a good looking Mk5, I liked it from the first time i've seen it for sale on the site.
I like that race car look.

The previous owner of this car is a real insperation. I took him and his son, whos names escape me now, its hard when your over 60.for laps around Sandown at a nissan club driver training weekend about 5 years ago. He was in a wheelchair and loved the Nagari at full noise and hard under brakes, he never once asked me to slow down. He was trying to get a cams license at the time and told me about his automatic MK5 he was building for track work. I hope he was able to get some track time.

He sure did and got his CAMS licence at Phillip Island. I am rapt that you were able to do what you did. I have a feeling that there were some Bolwell people who were not interested in encouraging him at all. His next project is a Skyline I believe.

hi john its Gary A who took him for the ride

I guessed it was you Gary.

Grant is very much an inspiraton to Pete and I. Just gets on with life despite the chair.

He does track time wth an SS VE ute and now has a Skyline to play with for track use.

The Mk 5 did have hand controls whe I first saw it.