The Resurrection of B8/91

Here's a few photos of B8/91, "before and after". Peter Jones discovered this car in pieces somewhere back of Cairns. It was a very original car that had been stripped down after a front end smash and the owner never got around to rebuilding it. I was looking for an original car with ID plates etc to restore to add to my sports (B8/81) and after following a few leads, eventually Paul Smith put me in touch with Peter and a deal was done. The problem of getting a damaged car, fully stripped, down from Cairns to outback SA, was solved ingeniously by Peter. His business in Cairns shipped auto parts to the south sea islands and had an industrial shrink wrapping machine. From the photos you can see the tape holding the panels to the body and the shrink wrapping still intact after the journey from Cairns. The only extra damage was to the front suspension, which collapsed on the way to SA. All the bits and pieces were safely cocooned inside the shrink wrap and all arrived intact. One photo shows the car after body repairs. This car was originally sold new in Adelaide, then travelled to Sydney before ending up in far north QLD. It took me almost 5 years to restore it and I drove it for a year before deciding that two Nagaris were one too many. I sold it to the Healey Factory in Melbourne and I believe the car is in Victoria. 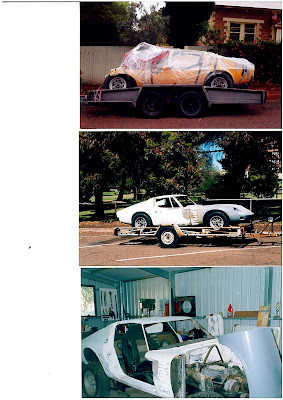 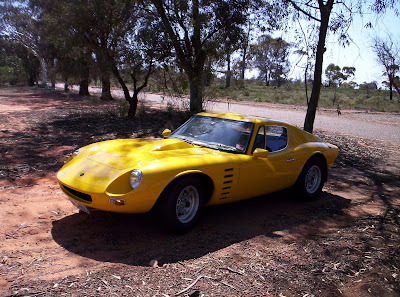