More on the Mark 5 screen

From Jim S in Tassie comes the following:-
"I'd be willing to bet a considerable amount of your money that it is the Austin Freeway/Cambridge rear window! I had heard years ago that it was the Austin one but can't remember from whom. Maybe George or Royce." 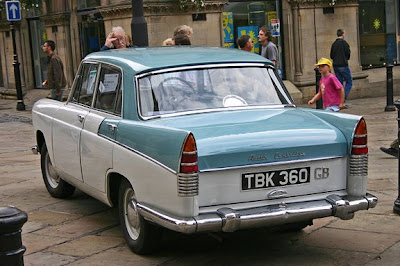 Not only the Freeway and the Cambridge, but the back windows were also shared by a particular model Morris Oxford and the Wolseley 24/80.
I used to have a photograph of an Adelaide based Mark 5 (whereabouts now unknown) that even had the chrome surround. It looked very smart. Beven may now have the photo because I remember seeing that very image on the cover of the August 2005 SA Slipstream.

The wide track Mk 5 as modified by Rob Wilson in about 1979 had a chromed windscreen suround.

This was the car I brought back from Northcote Victoria, had wire wheels on modified Triumph splines and may have been the car in the original Mk 5 brochure.

I have sent a pic via Gmail to you