With a new batch of reproduction Nagari mags coming out, some people might find this interesting. Robert H. Grant were the manufacturers of the Nagari alloy wheels and in 1978 offered the dies and rights to me. I had a small role in the design and marketing of a few SA made wheels at the time and I thought the price seemed pretty right. However, when I called around to have a look at what was on offer, they had difficulty finding the stuff. Eventually, it was located way down the back with grass growing up through it and it was all so badly pitted and corroded that nothing was really salvageable which seemed a shame. Bolwell, it appeared, after initial batches were produced, had never returned for any more, so down the back they went. 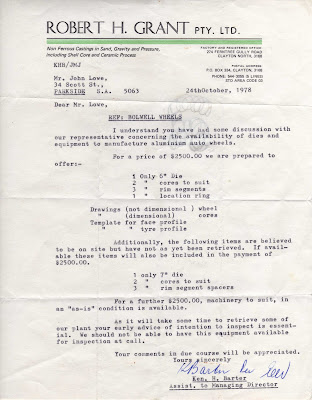 Robert H. Grant don't seem to appear in the Yellow Pages any more and I'm not sure if they still exist. I haven't checked 274 Ferntree Gully Road on Google Maps to see if a foundry is still there. It's quite possible because these days EPA issues preclude using land like that for most other things. Well that's the situation around here anyway.

Bob Grant was Tony Grant's dad, Bob passed away about 20 years ago and the factory is long gone. Tony was trying to swap crayfish for a new Bolly at the release. My parents were friends with the Grants and I spent many school hollidays at their place at Mc Crae on the Mornington Pensulina in the 50&60s. Tony and i have a mateship going back 60 years. regards Gary A.