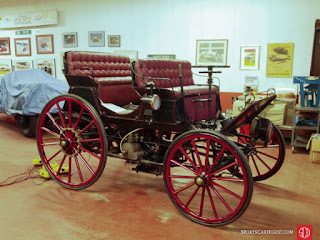 6.5 liter opposed twin, sequential 3-speed with reverse. – Enumerating the ways this 120-year old car is far ahead of its time will take a while, but it’s worth taking the time after saying its older UK restoration gave more emphasis to preservation than to appearance and Holman Engineering’s recent work has brought it to fully functional working condition. Keep in mind that when this car was built Henry Ford was still trying to figure out how to get his Quadricycle out of the barn, the first modern Olympic Games were held in Athens and Walter Arnold received the first speeding ticket for exceeding the East Peckham, Kent speed limit of 2 mph. You get the idea: it was a long time ago. Harry E. Dey’s vehicle was built for the Roger Mechanical Carriage Company of New York which had been importing French carriages and automobiles. Armstrong Company in Bridgeport, Connecticut built Dey’s conception under contract. Dey’s implementation was nothing if not prescient: 1) a DC generator (dynamo) built into the 2-cylinder engine’s flywheel; 2) electric starting (only, there’s no crank) with the dynamo operating as a motor; 3) wheel steering; 4) electrical clutch (fly by wire) closed by electromagnets that get stronger as the engine/dynamo goes faster; 5) sequential 3-speed shift (with mechanical reverse gear) integrated with the clutch for ‘automatic’ shifting; 6) a mixing chamber carburetor throttled by a butterfly; 7) tubing peripheral frame; 8) coil and spark plug ignition; 9) mechanically advanced ignition timing; 10) moving a switch while in motion will convert the dynamo to a motor for extra power. Dey recognized that the power pulses from the 2-cylinder engine were raucous, so he made the transmission drive gears from impact-absorbing laminated rawhide (now replaced by brass gears, it’s hard to get good rawhide in the 21st century.) There is plenty more, despite this looking like a crude carriage with an engine, but that’s more than enough to mark this as a milestone that got lost after its first showing in New York. Roger went broke and the Dey vehicle went back to Armstrong who had built it and sat in their Bridgeport mill until 1963 when the company was sold and an executive recognized this as an important and complete, if deteriorated, artifact. Dennis David also recognized its importance and it was eventually restored, with due consideration to its originality and survival in the UK by Robin Loder. Brought back to the States some years ago its operation has been refined by Holman Engineering and now it operates as intended. Its history is firmly established with period publications and as-found photos. It has been VCC dated in the UK and will start in the first wave of the London to Brighton Veteran Car Run where its 20 mph top speed may see it back in London before the last runners even leave the starting line. – ‘There was no right way’ to build a self-propelled vehicle in the transition from 19th to 20th centuries. Every inventor had his own ideas, but none had more original and prescient ideas than Harry E. Dey as embodied in this vehicle. It is marvelous, and motored around the lawn outside Bonhams marquee at prodigious speeds, all while in only the first of its three gears. Offered at RM’s Hershey auction with a $550-750,000 estimate but not running it fell short at a bid of $375,000. Now rendered with all its potential, it brought an appropriate price. Look for it at the Brighton Run next year after even further development where it will confirm American imagination, ingenuity and skill.