It had to be the Gawler train!

MAN TRIES TO TAKE CAR BUMPER ON TRAIN, IS MOST CLIPSAL THING EVER


An Adelaide motoring fan has been foiled in their attempt to bring home a humble little souvenir of the weekend’s races, and it may be the most Clipsal thing we have ever seen.
The unknown man was attempting, unsuccessfully, to take the front bumper of a smashed car aboard a train at Adelaide Railway Station when the wonderful moment was captured anduploaded to social media by local comedian Joshua Cruse. 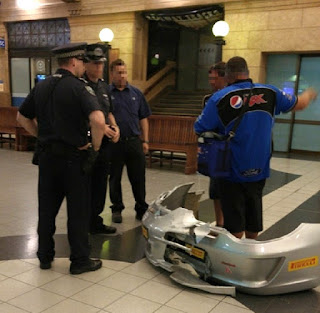 Note the fact these two must have lugged the bumper from the East End to the train station
Cruse, who had himself been in attendance at the car race earlier in the day, explained the exchange to ripitup.com.au. “He was just trying to get on the train, and the police said he couldn’t, and he was arguing about it. It was like, 10.00pm, and he was very angry.
“I don’t think it is a V8 bumper, it is probably from a touring car,” speculates Josh, also saying it was “likely to be the bumper from a Porsche Carrera”.
While SA Police told ripitup.com.au via email that “there’s no indication on our records that anyone was arrested/reported”, nor that “police were even called [to] the Railway Station at that time”, the Department of Planning, Transport and Infrastructure were much more informative.
“Adelaide Metro staff advised the person in the photo that due to the high volume of passengers on the Gawler service at the time and the danger that the item could potentially cause other  passengers he would not be able to take the item onboard,” a Department representative told ripitup.com.au.
Which means, wonderfully, that authorities had no issue with a giant chunk of car wreckage being hauled onto a carriage per se. It was merely doing it at peak times that proved problematic.
“The passenger was given the option to leave the item in storage to be collected at a later date, which he took up.”
The Department confirmed that the bumper was still in storage at Adelaide Railway Station, where our unknown collector will pick it up at a later date. Rest assured, ripitup.com.au will keep you abreast of any developments in this very, very important reunion.