Some history from the VHRR forum, 2008.
John Brigg's VESKANDAhttp://www.vhrr.com/Historic-Sandown-2007/images/dsc_3890.jpgIn the early 1970s, Adelaide commercial photographer, Bernard van Elsen, was bitten by the bug and took his Bolwell Nagari to Stan Keen for race preparation. At Keen’s he met former Elfin race engineer Dale Koennecke, who later went on to set up K&A Engineering with Harry Aust.One of their projects was a comprehensive redesign of the Bolwell, and the revamped car was easily identifiable in early 1980s sports car fields with its full-width rear wing.During 1984, Australian teams raced at Le Mans and a round of the World Endurance Championship was staged at Sandown. It was there that Bernie van EIsen got the idea for K&A to build a full-on Group C racing sports car to compete against the overseas visitors at the planned 1985 Australian WEC round. Perhaps it could also race in Japan or North America, and at home contest the Australian sports car title. K&A had not previously built a ground-effects car, but the general principles were well-known enough. Besides, two friends of Harry Aust’s, John and Bob Murphy, had just returned to Adelaide with a lot of first-hand practical knowledge after working in the US with the VDS CanAm sports car team. K&A laid out the car to conform not only to the then-current Australian sports car regulations, but also to Group C and IMSA rules. Where IMSA rules differed from Group C, K&A took the more conservative requirement.Thus the car had the IMSA-spec double front bulkhead and double rollover hoops, but had the 100-litre fuel cell and laminated glass screen (rather than polycarbonate) for the coupe cockpit as required by Group C. The overall width (2.0m), and hence the track, was set by Group C - as was the relationship between the wheelbase (2.71m) and overall length (4.8m), Group C rules set a minimum weight: 850kg, which the K&A car never got down to and also, to some extent, dictated ground-effect features by specifying a minimum area of flat surface on the underside of the car.As with some of K&A’s earlier sports sedans, much of the new sports car’s componentry was to be drawn from a Formula 5000. For, this purpose van Elsen bought the ex-John Walker/Peter Edwards Lola T332, which provided a 5-litre fuel-injected alloy-head Chev V8, a DG300 gearbox, front and rear uprights, steering, brakes and instruments.The monocoque tub was made in aluminium - in 1984 carbon-fibre sports car tubs were daringly new, even in Europe - and the honeycomb ground-effects venturis and bulkheaded side pontoons added stiffness. All the metal fabrication was done at K&A, much of it by Greg Mobbs.K&A also made the buck and moulds for the car’s bodywork, which was produced by various Adelaide specialists and used fibreglass with a strengthening Divinicell interlay.The immaculate presentation of the completed car gave the impression money was no problem. In fact, the car had no major sponsors and money was very tight. But, as van Elsen explained, construction was spread over 11 months and K&A delivered outstanding value for money. As owner/financier, van EIsen could have given his sports car any name he wanted. Calling it the Veskanda acknowledged K&A’s work.From their mutual years with Elfins, Dale Koennecke knew the Tasmanian open wheeler driver, John Bowe who, in 1984, had won his second Australian Drivers’ Championship. Bowe was immediately interested in the Veskanda, and so the final key member was added to the team.While testing at Adelaide International Raceway before the car’s intended debut there in June 1985, one of the ex-Lola wheels broke and Bowe crashed at high speed. Damage was thankfully light, but the car’s first race appearance was postponed until Calder in August, the fifth round of the 1985 GT/sports car championship.Up to that weekend, Terry Hook’s Lola T610 and Chris Clearihan’s Kaditcha had been the cars to beat in the series; at Calder, Bowe’s Veskanda - still not fully sorted - beat them both. It was a pointer to the season ahead.In 1986 the championship was utterly dominated by the Veskanda team. Using a 5.8 litre engine from mid-season, the car won every round and set new sports car lap records, and two outright lap records.The irony was that such domination served only to further weaken Australian sports car racing and the promised six-round 1987 series crumbled to just three rounds.Graham Howard 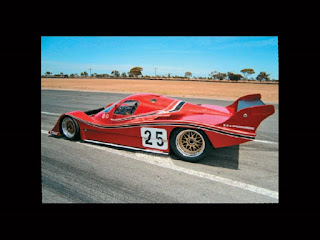 This car is at whiteman park motor museum. Had to drop the Byfield clubman there and went through the new part also with Peter Mack who saw two of cliffs other cars he has made there.getting his latest Riley based one there and hopefully the jack Ayres one he built. Pete now know why cliff is a legend here. 94 and still going strong.

Which car is at the musuem? The Kanda?