Alec Hamilton just happens, in addition to his many other activities, be a drummer in the Mount Gambier RSL Blue Lake Highland Pipe Band. 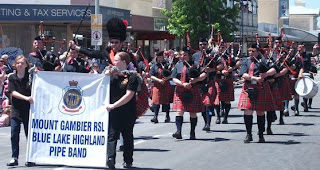 What's big deal about this is the band is performing at a Military Tattoo in Belgium this year from 19th to 24th September. A highlight of the tour is their participation in the Last Post Ceremony at the Menin Gate Memorial which takes place every evening at 8.00 in Ypres, Flanders, Belgium. Ypres was completely flattened in the 1st World War. 500,000 (yes, half a million) lives were lost, including about 9,000 Australians in a struggle over a few kilometres of land. This will be the first time ever that an Australian band has been asked to perform at this ceremony.
While Alec is up that way, we will try and link him up with Leo Kusters, the owner of a racing Nagari.
Posted by John L at 5:18 PM

We are introducing ourselves as manufacturers and exporters of Musical Instruments and highland dresses.

We are serving this industry since 1978 with all technical information, modern machineries and updated market demands under the supervision of highly skilled staff.

We have recently introduced our new service of online shopping to serve this industry more effectively and promptly.

Now any organization or person can order as minimum quantity as one piece/ pair or more through our online shopping store and we will fulfill the demand within few days after order confirmation.