A few weeks back the British Formula 1 manufacturer, McLaren, released details of an up coming road car, the Mp4-12C. Since the release I've been watching lots of sites where the comments are usually critical, emphasising the ordinariness (if that's a word) of the car. Considering the fact that it won't be seen until 2011, I feel this criticism might be a bit premature. Admittedly, the three seater F1, released almost 20 years ago (doesn't time fly), will be a hard act to follow but I can't see it being anything but a stunning vehicle. It certainly looks striking in the photographs. 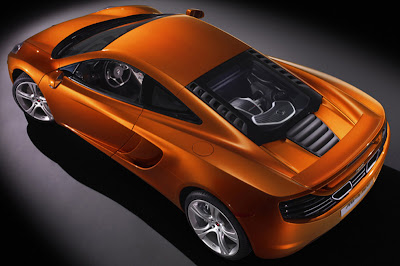 Not striking enough it would seem. A comment I heard was that it was so ordinary that you might as well go out and buy a new Lamborghini for the same money. That's ordinary? There seems no doubt that the new McLaren is putting race car technology into a road going car. The MP4-12C is to be built entirely in-house. It will have a carbon-fibre tub moulded in one piece and will be "ultra stiff". Into that will go a 600bhp/600Nm 3.8 litre twin-turbo V8, using a flat-plane crank for high revs and will be dry sumped to get the engine as low as possible in the chassis. All this power is to be transferred to the rear wheels through a twin clutch, 7 speed gearbox. The car only weighs 1300 kg and is designed to produce huge amounts of downforce. Ron Dennis is also hinting at a racing program. I'm predicting a quality car in the McLaren tradition. I'll take mine in orange of course.