The second car was new from the ground up on a brand new space frame chassis. This is it below in its black, red and yellow Lillydale panels livery. For a while it was purple and yellow with sponsorship from Goodies Speed Shop. Almost as soon as it was finished, ProdSports as a National championship ended. 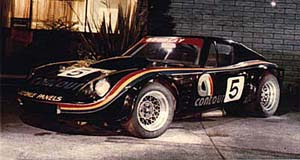 The car had a brief life as a Super Sports but that wasn't the intention when it was built. By about 1984,85 I think it all got a bit too hard. These 4 photos of the car were at a Victorian club show and tell in 1984 when Ric Kemp managed to borrow it and turned up with it on a trailer. 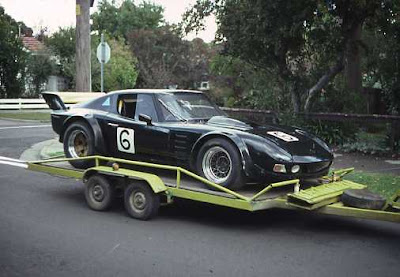 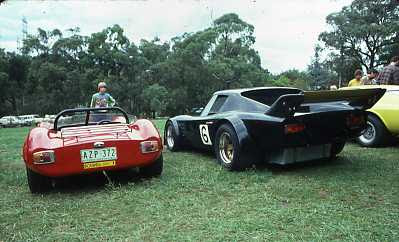 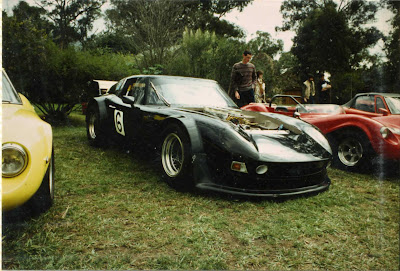 John Bowe got to drive Bernie Van Elsen's Veskanda. I would love to have seen him line up in Bernie's Bolwell after the K & A treatment against John (Gourlay) in the black SuperBolwell. Anyway, the body was removed and the car became the Mike Imrie Saab Sports Sedan. Later, Keith Rilstone rolled his Nagari at Collingrove and bought John's body as a replacement. After cutting off the flares, they changed their mind and pieced the old body back together. The unused body is still in SA and has a new owner who has another chassis and is building it into a road car. Peter Garvin has already mentioned previously that Darren Hossack drove the Saab for John and he is the son of Ron Hossack and I mention it again because later I would like to show you the fantastic Mark 7 that Ron built. What a tight little web of intrigue!

John,
I think you may be mistaken, the first picture (Contour sponsorship) and the Goodies(cicra 1980) car were B8/38, not the Super Nagari. The Super didn't have door glass channels (only perspex screwed around the front half of the door window opening, and I'm not sure if it ever had headlights fitted, only the black plastic covers.
The explanation as to the Contour car appearing to be painted black and having Lilydale signage may be that John Gourlay had some sponsorship deal with Lilydale before the Super Nagari was finished.
I hope I don't seem too pedantic, I think Prodsports is probably (& sadly) the most forgotten Aust. racing class, I wish I'd taken more notice at the time.
PeterG

I'm sure you're right. Except, perhaps, for the headlight bit. My experience has been that circuit cars that weren't open wheelers had to have headlights even if you never used them and that's why sports sedans with all-enveloping bodywork still had headlights behind the front panel. I recall an overzealous scrutineer insisting on little holes drilled in the front so that he could check if the lights were working.