For those who wish to follow the daily progress of NSW Bolwell Club treasurer, Gary Williamson, in the Repco Round Australia you can go to hra.org.au Gary is driving his ex-factory Colin Bond Cortina TE that came 4th in the original 1979 event. He wasn't going too badly by the end of the first day but day 2 seems to have been a bit of a disaster. At the end of day 3 it looks like he's at the tail of a 37 car field. He should have known better and entered his Datsun 1600 rally car. At the moment the first three cars on the road are Datto 1600s, the first 4 cars are Dattos (4th is a Datsun Skyline) and there are 6 Dattos in the first 7 (there's a Peugeot 504 in 5th follwed by a Stanza and another 1600). Still it's early days yet, Gary.
Just to emphasise the power of the Mighty Datto take a look at this superb shot taken by Simon Orme of Jack Monkhouse and Neville Whittenbury giving the latest 4WDs a bit of a hurry up in Rally SA the other weekend. (Love the number plate.) 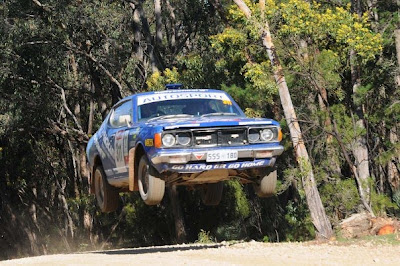 If you have got a day to spare, want to explore the roads of New Zealand, then treat yourself to Redline Run Car Rally adventure. All you need is a car and a road map, then off you go around the roads. Celebrate and party with people.