There has been a bit of forum discussion recently about the issue and recording of chassis numbers by manufacturers either at the time of manufacture or retrospectively. I have even noticed a reference to the issue of a chassis number on a compliance plate. This makes me think there might well be people who don't know what a compliance plate really is. A specification plate is placed on the car by the manufacturer and describes the car for future reference and may include the model, a chassis number and possibly the engine number if a factory built vehicle. Registration numbers wouldn't be included because they would not be known at the time of leaving the factory gate. The recorded chassis number would probably be stamped elsewhere on the actual chassis as well. The same goes for the engine number, it would be stamped on a designated position on the engine block. A compliance plate is a separate item and it is issued by the Vehicle Certification Board to indicate which Australian Design Rule numbers the vehicle conforms to. Below is a Nagari chassis plate. It is a blue one which says a bit about its manufacture date. Early Nagaris had black chassis plates and then they switched to blue. Sometimes you see a Nagari advertised for sale as a "blue plate" - well, that's why. 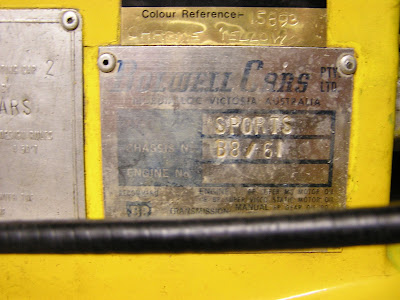 Here's an Ikara chassis plate. It's interesting that Bolwell recommended Golden Fleece lubricants. The very next year, Caltex bought Golden Fleece out and that was that. I've been looking around for Golden Fleece products for authenticity in concours events but they might be a bit stale. Talking about authenticity, I've seen GTS owners shopping around for redline Aquajets to put on their show cars. How hard would they be? You wouldn't want to drive on them. 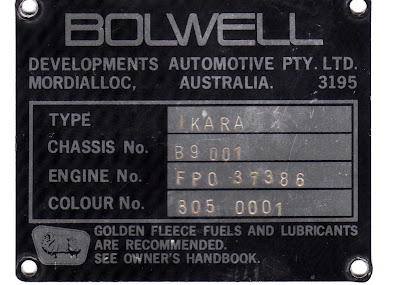 Here's an early Bolwell chassis plate some people might not have seen before. 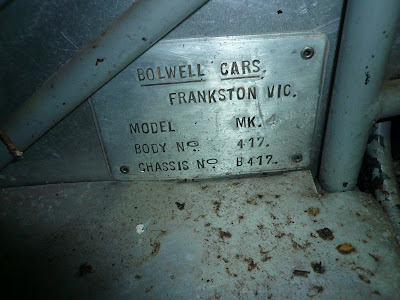 And THIS is a compliance plate. 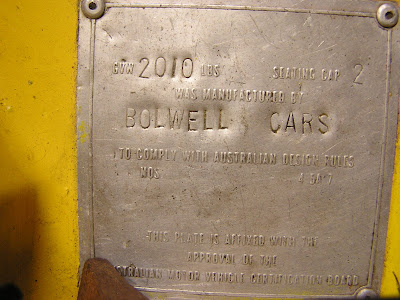 P.S. Don't wory about ringing me with your unopened tin of Golden Fleece oil. I was only joking.
Posted by John L at 12:00 PM

My belief is that Compliance plates commenced with Australian Design Rules, the first of which required seat belt anchorages in 1964 and from 1967 seat belts had to be fitted to the front seats. Manufacturers or body plates were fitted since pre automobiles as horse drawn vehicles also had plates. Cars and bikes with chassis plates from the chassis manufacturer and body plates by the coach work people which in mass production became one plate. In Australia, plate by say De Soto and second plate, for example "Body by Flood" are very common.

When I examined the Mk 4 in Germany it was obviously an "air car" as apart from non original MK 4 chassis (square tube) and longer than original it had an extremely high Mk 4 chassis number and a later model Bolwell ID plate. Great car by the way and definitely worth buying. As Bolwell issued the plate then it still is a Bolwell. Guess a continuation model.
Lets hope we don't get done to nit picking over plates like the rare car collector people do.