What's in a name?

This article in "The Age" on the upcoming MX2 has sparked that "age" old question regarding the similar Japanese and Aboriginal words with exactly the same meaning with the reference to the Mazda Nagare coming from the Japanese phrase "to flow".
Peter Garvin writes:-
"John & Tony,
I know this has been discussed before, just what are the origins of the name 'Nagari', was it Aboriginal or Japanese or purely coincidence? Just what is the origin of the name, and how did Campbell and Graeme arrive at the name?
Peter."
Campbell is really a bit vague about it but reckons they found the word in an Aboriginal phrase book that happened to be lying around the house and thought it sounded pretty good but can't recall where the book has got to. Over time, various Nagari fans have rushed about looking for books of Aboriginal terms with what success I'm not sure. The reference to "Aboriginal phrases and words" is fairly vague to me anyway, as there is no one Aboriginal language but literally heaps of them. The debate continues. 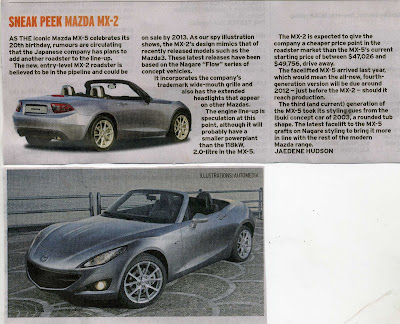 Chris Gascoigne found a website listing Aboriginal words. Nagari gets a mention. I've put the site in the links.