This was a coupe I had for a fair while, selling it only because a much later one came up, which I'll also tell you about , probably later in the week. I was going to make this a "where is it now" post but I know the answers because I've checked. The car was built in 1973, the colour was Vermillion Fire, with black trim and black dash and was fitted with the familiar 302 V8. Extras when I bought it included twin exhaust, a front air dam, an Airporte glass sunroof and the nose piece had the two extra holes on either side of the opening into which I inserted spotlights at one stage. The dodgy bit was the tubular sleeves over the broken bits of the original wishbones.

I don't know if he was the original owner but Philip Williams of Bairnsdale (100 miles the other side of Melbourne) sold the car to a Morwell car dealer (K.W. Motors) in March 1981 for $9000 with a slightly noisy third gear. In May of that year, Donald Till of Strathalbyn SA paid the dealer $10,000 for it. "Strath" is a fair way South of Adelaide and is actually where our Macclesfield stage in the Classic Adelaide finishes. It was Don who I bought the car from. It wasn't long before the front spoiler had to go. It and spoon drains just didn't see eye to eye. 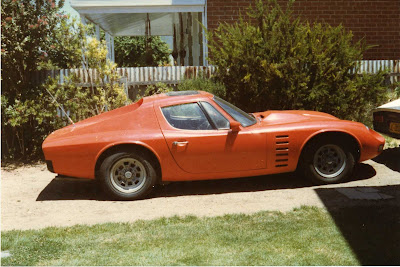 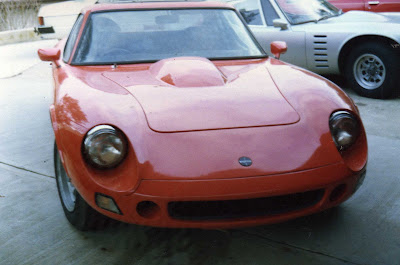 When the other car came up I wasn't able to sell B8/43 straight away so we had two coupes for a while which put a bit of a strain on finances and relationships but we're a resilient bunch. Eventually John Arcus, in WA bought it. I have a feeling John lives in Indonesia now. Anyway, John had a big prang in it and that was that. Greg Wigger, who has another Nagari coupe bought the wreck. That was ages ago. I have heard that nothing further has happened but I have also heard that Greg intends to rebuild both Nagaris as a retirement project, one day when he retires obviously.
Posted by John L at 10:36 PM

Thanks to all those who emailed me to point out my mistake quoting B8/43 as a 1973 model but that's how it appeared on my registration certificate. The mostly Victorian people who know all of these things reckon it was built in 1972. I agree with that but even that is amazing when B8/49 was built in 1971. I don't have copies of factory production records like the Eastern Staters so I appreciate learning from my mistakes. The Nagaris didn't go out the door in numerical order. I have heard that B8/01 to B8/49 were built in 1970-71 and B8/43 and B8/50 to B8/83 were built in 1972. What held up the works on B8/43 I don't know but hiccups in the production of some of the cars were not unusual I believe.