Here are those 2 photos Pete G was talking about. 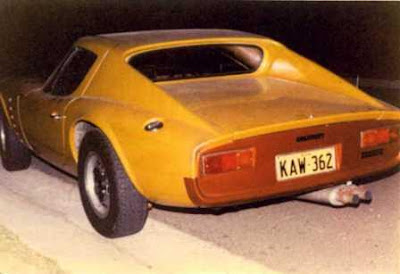 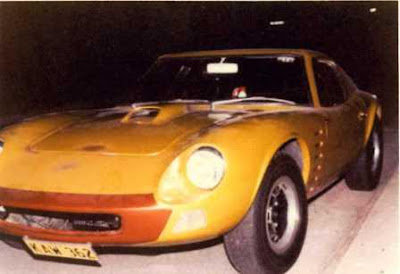 Yes it does have copper or bronze coloured nose and tail. Peter asks "is it possible that the car may have been Gold in these photos?"
He and others find it interesting that the car originally had a 4-barrel carb. This makes it very possible that it was originally equipped with an XT Falcon GT 302. In various articles on the car HP figures vary from 220 to 290. Similarly the front disc brakes have been variously described as XT-GT (non-ventilated) and 11" ventilated.
In the 2 photos above, we see the unpolished parts of the 2-piece wheels painted black.
Below is a Custom Rodder article on the car from 1970. 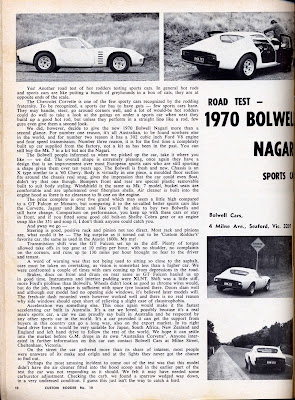 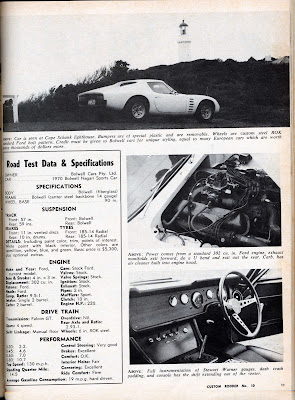 The last paragraph raised a smile from Peter regarding the car's lack of power.
Posted by John L at 11:05 AM

Colour: These photos are scans of two of the only three photos I ever took of my car! Taken in October ’79. They were scanned by a guy where I worked - I’d forgotten about it. Small world the internet. The photos are not good indicators of the actual metallic colours. In real life the nose and tail, and I’d forgotten about the fake ‘vents’ at the side, were more ‘coppery’ than it shows up in the photos. At least that’s now sorted out.

Carby / Engine: I have photocopies of some sections of the XR/XT GT Supplement to the Falcon factory workshop manual. Unfortunately the carburettor section is not one of them, so can’t say whether it is the GT or an aftermarket 4 barrel. Aust. Motor Manual Feb. 70 has a small photo of my engine (I can see the dented oil filler cap), which I assume has the original carby. Some may know whether this is the GT carby or not. The spec column wrongly lists the engine as a 351. The article does say, “It had to have an Australian image, so what better engine to use than the Falcon GT unit.” My guess is that someone at Bolwell told them it was the GT engine, but the writer had not realised it was the by then superseded XT GT. By the way, the supplement says 230 bhp, From memory the standard 302W was 220 and 351W 290.

Brakes: Non-vented 11” as were all the XR/XT discs. I’d always wondered why mine had huge 1.125” rear wheel cylinders. Turns out both these and the dual master cylinders (also fitted to my car) are XT GT only, being different to the basic XR/XT V8 and XR GT. What the supplement didn’t say, though was obvious once I stopped to think about it, was that only the front brakes are power assisted.

Wheels and Tyres: When I bought it, someone had roughly spayed the inner part of the wheels black. Each wheel was different. I rubbed them back by hand and resprayed. Interestingly early photos show B8/1 with Michellan XAS tyres. I remember an article saying that they were original equipment on the XT GT. Were they still running radials at Bathurst in ’68?

My theory for what its worth is that the engine, gearbox, 8” diff and complete braking system all came from the then current XT GT. By the time the next one was built, XW had arrived so components from that model were used.

That leaves interior and suspension for next time.

Colin has said:-
Didn't the XT GT have an Autolite 4 BBL carbie?
I had an XT GT back in the day and it had an Autolite.
I believe Autolite were owned by Ford and hence US Fords ran Autolite carbies.
GM owned Rochester and hence GM V8 cars ran the Rochester Quadrajet spreadbore 4 BBL as did the Monaro 327 and 350s.
In the pics of Nagari # 1 from Custom Rodder it looks like it has an Autolite 4 BBL.
From memory the Autolite was about 450 cfm and has small primaries and larger secondaries.