This photo has been sitting on my desktop for ages waiting for me to get around to posting it here. It is Ray Kenny in the Thompson Special and it looked to me to be so much like a Mark 4 that I wanted to ask via this forum whether the body had Bolwell origins like the Williams Special. Anyway, Ray turned out to be yet another former Milano GT racer so I was able to ask Ned McGovern that very question. The answer turned out to be "no". It is a copy of a Lola body. 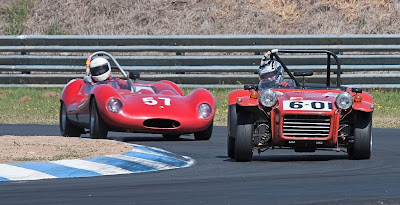 In Tasmania in the 60s, Bruno Carosi (now a Jaguar man) raced what was unmistakably a Bolwell Mark 5 as a Carosi Special. In Victoria, Bill Hamon also raced a Mark 5 but his car was called a Bolwell. Years later, when I tried applying for an historic log book for my Mark 5 (unsuccessfully I might add), I was told by CAMS that I would be more successful if I called the car a Hamon Special. I couldn't really do that because it wasn't the actual car. I was also told that if I was trying to logbook a Lotus it would be easier because Australian sports cars were not held in very high regard in Australia. I'm sure things have changed a lot since then. However, you can see what Bruno von Rotz is up against with his Milano GT.

Wow,so cool!Wonderful blog.Coming to your blog We are very pleased to.
Nice to meet you.We upload something about the works to the blog.
We invite you to our blog.Look forward to your visit.Happy every day!

John,
Were you thinking of the Williams Special which did use a Mk4 body.
http://www.acmefluid.com.au/williams/index.html