There's a lot of things to talk about, like the wonderful Bolwells that appeared at the Easter National get-together, Mt.Alma hillclimb, Bruno's logbook difficulties with the Milano GT etc., etc. but I just wanted to share a couple more pics from Collingrove before moving on. I was amazed at the small number of entries. I've never seen it like that. Easter has always been a big item in South Australia for the historic movement, with a race meeting at Mallala on the Saturday and the hillclimb on the Monday but this year the empty paddock was more than just noticeable. Maybe it had something to do with the economic downturn although I don't think so. In an email a couple of weeks ago Dick Willis was looking forward to learning more about Bolwells over Easter because he was going to an Historic race meeting at Bathurst and spending some time with "Bolwell people", Kluver and Mahoney, who were also competing there. On top of that, I'm sure there were a lot of people preparing for Mt. Alma the following weekend which had quickly become oversubscribed as soon as entries came out. Anyway, it gave the regularity entrants, that were there to make up the numbers, the opportunity for more runs. People like Kym Ninnes, with his Clemente, seen here scientifically letting some air out of his tyres with the end of a match. 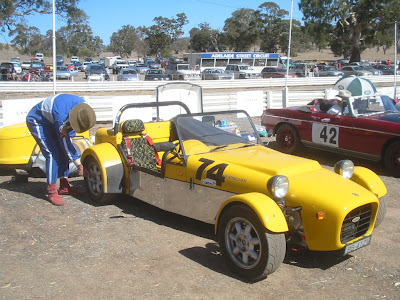 Behind the clubman you can see the matching fibreglass trailer (identical to fellow Clemente builder, Tony's) which is handy for bringing your extra equipment along with you without the need to unpack your car to compete.

Finally, I just wanted to share this photo of a very smart looking Triumph Dolomite which was in the car park. 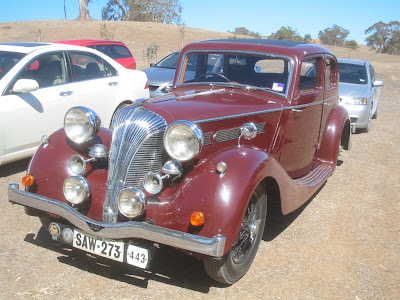 What about the Datsun?