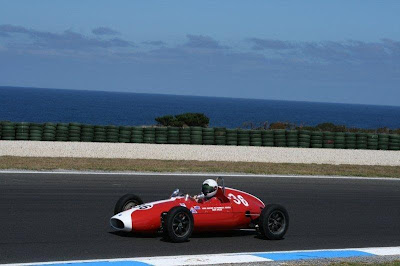 This is Dick Willis in the Ausper T2 Formula Junior at Phillip Island last year. Dick, via Beven has sent this history of his Ausper.

Auspers were built in London by Australians, Tom Hawkes and Adrian Gundlach, the name Ausper being an abbreviation of the name of their company, Australian Performance Cars.

The Auspers were built for the Formula Junior category, a class designed to provide lower cost racing for up and coming drivers by using volume production based 1000 and 1100cc engines, production transmissions and brakes, combined into a single seat body/chassis, similar to, but smaller than the Formula One cars of the day.

For their first season Auspers built two cars, in 1961 three known as T3's, then three 1962 T4's whereupon production ceased. Our 1960 T2 Ausper was run as a works entry during 1961 by Australian, Steve Ouvaroff with moderate success, and then laid aside until purchased by Rhodesian, Gordon Littleford in 1963. In Rhodesia it was passed on to Mike Wesson who re-engined it with an Alfa Romeo 1500cc unit and raced it in local events until 1969. We have had contact with him about the Ausper.

Passing through several other owners who progressively cannibalised it until all that was left was a derelict body/chassis unit, the Ausper was eventually rescued by expat Rhodesian now living in Australia, Ivan Glasby in 1995. Coffs Harbour enthusiast, Dick Willis acquired the remains in 2001 and immediately set about restoring this significant car to its original Formula Junior format and has since competed in Historic Formula Junior events.
Posted by John L at 5:05 PM

ooer, nice cars - but methinks my cousin would be more interested (if he wasn't beset and besieged by crashing economies, just now .. heh)

Hi Anonymous. I am just so lucky being poor. Crashing economies have a bit less effect on our types. Does your cousin by any chance live down Brighton way and used to race a Bolwell?

Hi
Can anyone tell me exactly where in London the Ausper Formula Junior Motor Race Car was built. We know it was Shepherd's Bush, but an exact address would be appreciated.

Also, does anyone have any information on whether Tom Hawkes is still alive. If so, any contact details would be appreciated.

On their letterhead is the following address:-
Competition Cars of Australia Ltd
247 Goldhawk Road
London W.12

Tom died in North Queensland, June 13th 2001, from cancer, aged 78.
He had suffered from brain damage after being beaten up by a street gang in London many years earlier.