Peter Marr has written today:-
"Interesting about the tail lights. I haven't found your original post about them (and can't remember the content - CRAFTS again) but from the pics of Barry's car in WA I gather that some think that the lights should have the indicator on the inside and the stop/tails on the outside. Am I right?
If you have a look at the attached pic of my ex cars you will see that both have the lights with the indicators on the outside. The Nagari was as it was when I got it (which doesn't mean much after 30 odd years) but the Mk 7 lights were from a Suzuki Grand Vitara. They were marked Left & Right and whilst not marked top and bottom you could tell from the way the drain holes were in them which way they were meant to be fitted." 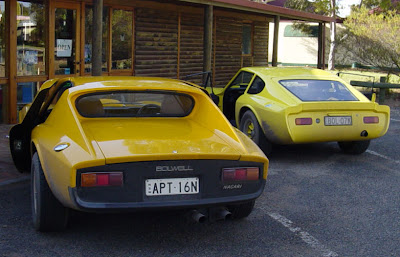 The original post was on Saturday, 9th Jan. 2010 and titled "Easter @ Bridgetown, 2010" and yes, Peter, the discussion was about whether the indicators should be on the outside or the inside. I'm not at all sure about this but meanwhile, I'm off to our friend, Geoff's, to check out the back of his Vitara. The light assembly might be a good substitute for a pair of truck lights on a Bolwell we have up here at the moment although they look pretty smart too.
Posted by John L at 11:06 PM

I probably instigated the original post, after having gone through the process of building and registering a trailer in Vic, our law states that if a taillight and indicator are not in line vertically, the indicator must positioned on the outer side of the taillight. The original Nagari taillight ass. is the same, left and right, so I suppose it's easy to reverse the position during a rebuild.
BTW I think the Grand Vitara lights may have been "File 13'd" by JH in favour of LED's similar in size to Nagari original lights.
PeterG