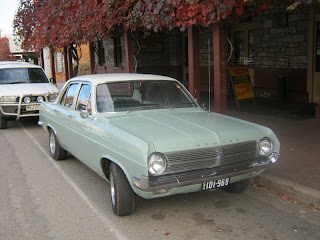 This local 1965 HD was outside the pub last week. The HD was the most shortlived Holden model. It was a bit of a culture shock after the EH and wasn't taken up with enthusiasm and at the end of the year they moved on to the HR like this roughy for sale at the swap meet. 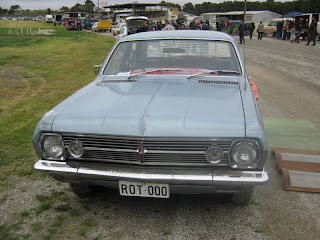 Actually, I had a 179 HD when they were relatively new and I liked it. It was that teal colour that Port Power use, with a white roof. It wasn't as quick as my brother-in-law's X2 version but I could keep up with him nevertheless. I think the X2 had twin carbies and extractors. We both moved on to Warwick yellow GTSs when they came out. 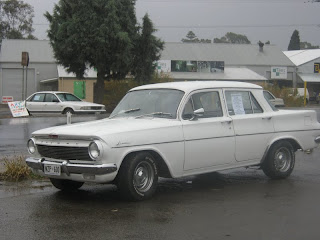 This is an EJ sitting in the rain on the Perry Road corner trying to take advantage of the passing traffic from the trotting track in the hope of a possible sale. The EJ was the last model to use the good old grey engine before the red motors came out in the EH.
Posted by John L at 7:47 PM

I am getting an error when I try to respond to posts on the blog - error code bX-rynfwe.

The rough HR has a HD front valance with HD indicators possibly due to a cheap repair job as the stock indicators are still present in the grille.

Dunno why but HD's seemed to be rustier than other more cherished Holdens and I had several in the $ 250 price bracket with rego and such when I needed a 'go to work" car in the Barossa.

I did own an immaculate HD Premier X2 Auto with disc brakes in white with red trim and was reasonably quick for its era.

This car also was all the one colour without the white roof they normally had.

Again used to pick up the HR special's for about $ 500 including utes to use as tow cars pulling Bollies to and from Melbourne and country Victoria.

I lusted after a Picardy red HK GTS 327 but my 1969 HK GTS was Silver Mink with red trim and delete bonnet and boot stripes,

That's an interesting way to look at it. The HR had the larger sales figures overall because it was on the market for two years whereas the HD was only available for one. These days the ratio of HRs to HDs has increased because it seems it is more desirable to preserve the HR.

From the high of the EH GMH were competing against ever improving product from Ford and Chrysler and there can be no doubt that the XP and AP6 had far better sales figures than previous Ford and Chrysler models. XP sold nearly 4000 a month while AP6 sold 3,600 a month all eroding GMH sales. From 1964 to 1967 Ford jumped by over 1,100 cars a month while Chrysler by the same amount and in a similar market so many of these would have been conquest sales from GMH. I cannot remember any of my friend's parents buying an HD but there were many new EH's and AP6's and then HR's and VC's. My grandfather perseveared with XL, XM and then XP Fairmont while my uncle ran an XM Hardtop following on from a Star Model. My parents owned taxis and no Ford got a look in from 1955 to 1970 the consensus of opinion with our camp being GMH were the better choice for vehicles doing half a million miles in a service life. I am sure the "blue" fanatics among cab owners would claim the same for their chosen brand for the same period.

Re HD X2 engines, all X2 and 186S engines were fitted with cast iron headers twin carbies (BXUV2 fitted with restrictors) and a hotter cam. Extra gauge pack and stronger clutch in manuals. The HD X2 had a heater box cast into the headers while the 186X2 came with a water heated manifold hence the headers changed and were the same style for 186S and the GTR Torana. Given the first mod people did was convert to tubular extractors as the early cast headers used to crack it was for a time in the 1970's almost impossible to find an early X2 with the cast iron headers. Same thing happened with Chrysler slant sixes where cracked exhaust manifolds let to the cheaper repair of fitting extractors.