Isn't this a great photo? 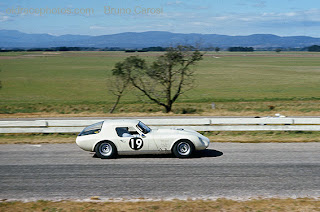 "elrosso" posted it on a motor racing forum along with others recently. I'll gladly buy a copy from him for my wall when the oldracephotos.com website comes back. There's also a black & white one of the same car that's pretty good. From memory it looked like it was at Baskerville. Autopics have one as well of Bill Hamon's Mk.5 at PI. There were others too, so don't tell me that there was no such thing as a racing Mark 5, CAMS. Anyway, this car, No.19, was the 179 Mark 5 of Bruno Carosi and was quite successful really. There is a photo of it among the "Hall of Fame" pictures at the Longford Hotel. It's also famous for its photo finish dead heat with an Elfin in 1966. I heard recently that the car was destroyed by fire. Bruno, a Jaguar stalwart, went on to race this Mark II Jag touring car. 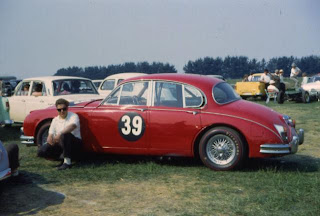 It's no ordinary Mark II. It was purchased from Bob Jane after Bob had won the ATTC in it. I presume the Bruno Carosi Bodyworks and Truck Tow business in Launceston is the same Bruno Carosi.
Posted by John L at 4:23 PM