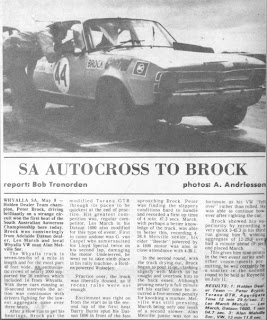 This is a clipping from Barry Burns' scrapbook.  THIS is the Rallycross car. Brock used to bring it over for the rallycross events we had here at Whyalla and Reynella. It is not Larry's car although some of the bits from it are in that car, like the gearbox cross member and the 2" SUs for example. His car, somewhat similar, was ex-Bond, Jansen, Watts etc. By the way, remember Harry Firth saying that through extensive calculations they worked out that setting the engine back 8" was the perfect spot for it? It just so happened that by swapping the engine mounts, putting the right one on the left and the left one on the right, it set the engine back 8".
Barry Burns was State Rally Champ in 1980 and 1981 you may recall, in Dattos of course. Our old friend, the late Dave Milne, was his co-driver in those days and was State Navigator Champ '80, '81. Barry had the dubious honour of spinning in front of a hard charging Peter Brock in that particular Whyalla event. Anyway, here's another clipping. 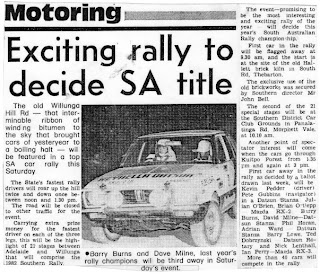 Didn't the HDT rallycross car have a single 2" SU with a supercharger? If the engine was set back 8" this would explain why the SU sat so far back in relation to the bonnet.