Larry K has picked up the remains of what's supposed to be a Buchanan Triumph in the Adelaide Hills. As an aside, the arsey bugger found at the same place a Lagonda diff surplus to requirements that he needs for the build of his HAR single seater race car. Anyway, here's a few photos. 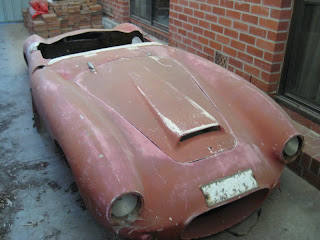 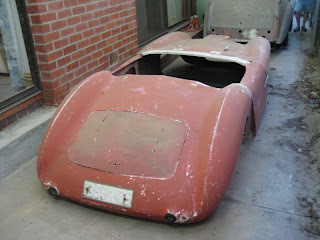 This is one of the doors. 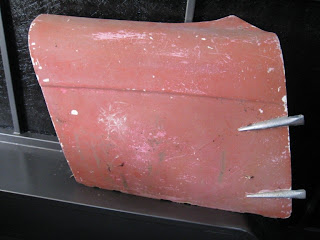 This is no ordinary Buchanan body. It comes in 3 separate sections, a front, a back and a central section. The Buchanan bodies were a one piece arrangement with add-ons. This one has no sills. The doors go down to the bottom. It doesn't have the twin cowls above the dash, or a single cowl for that matter. It's just flat across the scuttle like the Buchanan Cobra and the later Buchanan Buchanans. It doesn't have the cutaway front guards either. Supposedly there were 6 bodies made like this and strangely most of them made their way to South Australia. So, the experts tell us that this is one of the more recent bodies that were made after J & S took over the manufacture.
Here's the number plate still on the car. 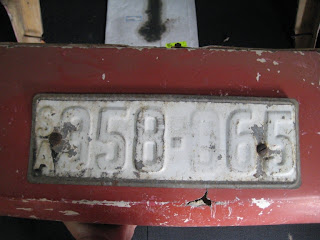 358-965 I think it says. In those days the numbers were issued in sequence so you could actually tell the month and year that they were first issued. In this case it would be 1952 or 1953. Now that doesn't mean much really because the registration probably just continued on with the donor chassis and mechanicals.
Other experts have suggested that this is the same Buchanan that lived in Murray Bridge many years ago and was photographed by Steve R. See below. 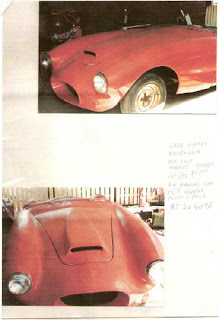 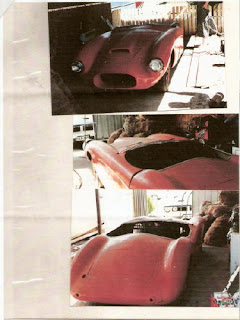 That's not the case, there's a lot of things that are different. No fuel filler hole on the back for one. Besides that car has been in Williamstown for a while now, in the hands of Bolwell Club member Immanuel H.
Now remember some time back I mentioned that when we were in high school we used to go to Albert Ludgate's to see his sports car creations? He built the Capricornias. One very famous one certainly had a Buchanan body (albeit shortened a bit). That was the Repco headed grey Holden powered one that Tony Parkinson sold not all that long ago. His earlier one had a less up to date body made in Sydney I think when fibreglass was just taking off. The car that we used to go and see at Colonel Light Gardens was neither of these and the body appeared to have been from a mould taken from a 100/4 Healey. I remember it distinctly, in white gelcoat and with a grey Holden motor. Back to the picture of the door. A Healey like crease through the middle and the rest of the door looks very Austin Healey.
Now take a look at the Holden powered Triden that's for sale on my105. 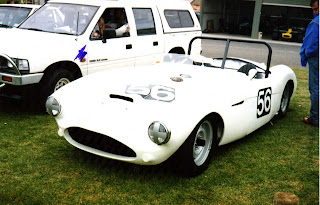 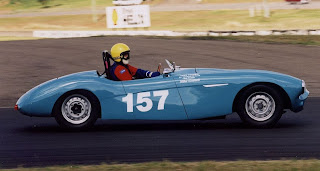 The body appears to be identical to Larry's and look at that Austin Healey crease down the side. The dimensions of the bonnet are exactly the same and a fair bit different to the standard Buchanan opening. This car had its origins in South Australia in 1956. Now it's time to go back to 1956 and find out where these bodies came from. The Triden does seem to have a Buchanan looking nose though.
Posted by John L at 7:50 AM

Interesting tunnelled headlight treatment on the red body. My Buchanan V8 also did not have the recessed front guards nor the body line in the doors.

The more I look at these pictures the more I suspect they are not original Buchanan bodies but from a new mold built up off an original body. The doors are a giveaway, no Buchanan has the door extended in at the top or all the way down to the scuttle. Also the housings for mounting the rear lights are different, the lack of cockpit cowlings and no bulkhead also indicate they are not likely Buchanan. Add in the closed in front wheelarches and I suspect they were produced in SA as so many have turned up there. The de Mac special may have been the inspiration when it showed up back in the late 1950's.