I forgot to mention in the previous post that Ranald made this roadster from a coupe, the soft tops being in their infancy. Ross McConnell, who was working at Bolwell, remembers taking a wrecked coupe body to the tip and being followed by Ranald but can't remember any other details. Jim Shanahan also worked at Bolwell then and he remembers the body was from a Canberra car that was rebodied. That was not unusual, there were quite a few Nagaris that went to ACT, quite a few that were driven hard, quite a few wiped out and quite a few that went back to the factory for repairs or replacement. A lot of those Canberra Nagari guys hung around Reliance Rotary, a Rotor and Rally oriented workshop over there. A few good stories could come out of Reliance too one day, but I'm off the subject again. No-one's sure where the chassis came from but some of the "insiders" have thought it could have been possible that "Bolwell or Linley may have supplied an extra chassis for cash"! Gary Allen lives near Ranald, maybe he's heard a bit about the history of this beaut car.
Anyway, as you can see from the following two little snippets, Ranald sold the car to Alan in the very first part of 1974. 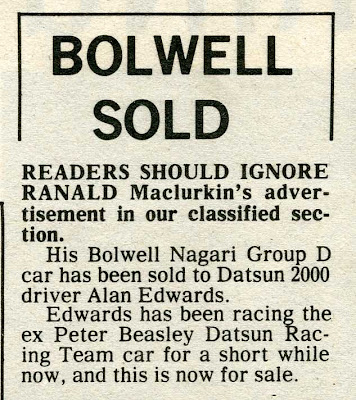 Peter Garvin has provided these two following ads in Auto Action where Alan was offering the car for sale in 1978 but he must have thought better of it because he was still keenly racing it 3 years later. 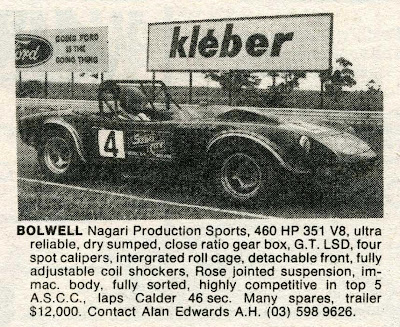 Finally, here's an article from the motoring section of The Age where Chris De Fraga took the car for a spin at Calder in 1978. 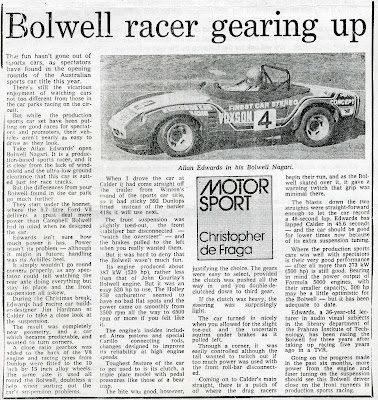 Was Alan Edwards in any way connected with the Datsun 2000's that Alan Hanns raced before he went onto the Nagari with you?

No, I'm sure it's all coincidence. The Datsun 2000 was very popular because it performed so well. Alan Edwards raced the ex-Peter Beasley car. Peter was a long-time Prod-Sports driver who continued with other sporties after the 2000, ending up with a Jensen-Healey I think. Both of Allan Hanns' cars came from Gordon Dobie who had this little garage on Beach Road just out of Melbourne called the Datsun Performance Centre. Where-ever he could, Allan used the number 54 on the Bolwell. This was Gordon's number that he used on all of his Datsuns. Allan admired Gordon greatly and with good reason. Gordon was a bit of a Guru with Datsuns. He ran the Datsun touring cars until about 1970. He also raced F2 with a Ralt RT4. I don't know how old he would be, he started racing in 1958.

Then again, maybe Beasley and Dobie were team-mates. They were both Datsun Racing Team blokes.

I often used to drive passed the funny little workshop on Beach Road near Mordialloc and remember Datsuns being worked on up into the late 80's. last time I went past late last year was no longer a working garage. Bit like Siggs 'Governor Young' garage on Grange road. Wonder whether Fleetwing Lakemba still exists

Jason lea
The Datsun Sports 2000 of Alan HAnns was bought from Bob Cox in mid 1970's, it was the ex David Mingay Richard Carter car, it then went to Chris Muelengraf in SA.
I know own that Datsun Sports 2000 here in Brisbane.
I also was a student at Caulfield Grammar in Melb, when Alan Edwards was the head Librarian mid 1970's and can remenber looking in awe at the Bolweel roadster when Alan brought it to school one day for a "Show and Tell" session.
Thats what started me off in the debauchery of motorsport
I still race the historic datsun 2000, it wins plenty.
I am looking at something that has a bit more grunt, and notice the ex teve Webb car is for sale.
I am also a close family freind of the MacLurkins
Small world hey
i am on
dat2kman2@hotmail.com